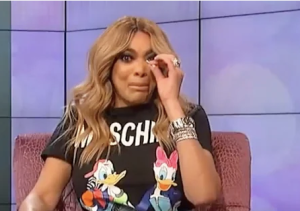 Wendy Williams was reportedly at risk of dying in 2020 before her friends intervened.

According to reports, the talk show host was taken to hospital in order to undertake some blood transfusions. This was part and parcel of her deterioration in health as a result of being addicted to alcohol. And it all came to a crescendo when her friends discovered that she had been in a state of catatonia in her apartment.

And yet, Wendy’s previous manager, Bernie Young, had allegedly not called the ambulance services for fear that this would all come out in public. A source confirmed the following: “She’s going to die. She literally couldn’t stand up.

“She was just lying on top of the covers, and she needed 911 help, and [Young’s] like, ‘We’re not getting 911.” It was pretty clear that things were very serious. It is alleged that during this whole incident, a massive case of alcohol had been discovered.

Not only that, but her apartment was also all over the place since she was not in a good place. And when her friends came face-to-face with Wendy, it was clear that her faculties were not fully there as she was not really responding to them.

The following comments confirmed as much: “It was pretty much a mess. It was a mess. She was in her robe, it was soiled, she was catatonic, she was in a very, very bad state. She was looking at the ceiling. She was just not responsive, but her eyes were open.”

As of now, Wendy is reportedly back in rehab to deal with those very same issues. It is suggested that Wendy’s drinking problems have gotten worse, which is why immediate intervention was required.

While it is not exactly clear which facility she is in, it will no doubt be a critical experience. A source stated: “It’s gotten worse. She went from wine to straight-up vodka.” So there you have it folks. What did you think about this? Let us know your thoughts in the comments section below.