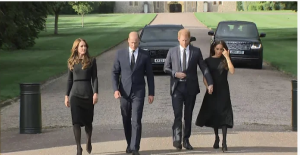 The Fab Four’s recent reunion at Windsor to pay their respects for the late Queen Elizabeth II was very difficult.

Prince Harry, Prince William, Meghan Markle and Kate Middleton showed a symbol of public unity by walking together at Windsor. While that may have been the case, it did nothing to suggest that there was going to be a reconciliation of any sort.

There had been a lot of background tension prior to the late monarch’s passing, in particular Meghan’s controversial interview with ‘The Cut.’ With that being said, it was never going to be happy families.

A source confirmed the following: “It was awkward. Both couples found it hard. They were in a stoic spirit of just getting through it for the Queen.” Ultimately, the decision was made for the greater good since this is what Queen Elizabeth II would have wanted.

Not only that, anything else would have generated negative media scrutiny. There could easily have been a scenario where the two couples walked separately to pay their respects. In addition, there was also a possibility that Harry and Meghan may have skipped the event altogether.

But with so many questions still yet to be answered, in particular if Harry’s tell-all memoir is set to go ahead, coupled with reservations over its content, do not expect things to be plain sailing moving on.

And this was precisely the sentiment being expressed on social media. A significant proportion of fans did not believe that this would lead to any reconciliation.

One person wrote: “That is all on Harry,” while another person stated: “Wouldn’t you feel awkward attending the funeral of a lady that you have run down to everyone who will listen? His Grandmother is not to blame for his situation.”

There will always be calls for the family to reconcile. After all, that is what Queen Elizabeth II wanted to see. So there you have it folks. What did you think about this? Let us know your thoughts in the comments section below.