Skip to content
Home > Celebrities > Nayte Olukoya > ‘The Bachelorette’: Nayte Olukoya Reveals All On His Break Up From Michelle Young-‘We Just Stopped Clicking’ 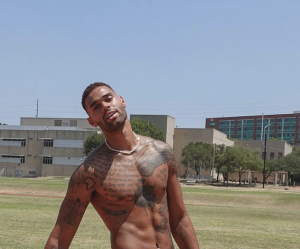 Nayte Olukoya has opened up on his break up from ex Michelle Young.

‘The Bachelorette’: Nayte Olukoya Reveals All On His Break Up From Michelle Young-‘We Just Stopped Clicking’

The duo ultimately got engaged following Nayte’s victory as the winner of ‘The Bachelorette’ on season 18. During the course of that process, it was clear from the outset that things were not right.

Nayte expanded on how things were completely different once the cameras were not there, as they were having numerous arguments. So much so that he admitted it was only two weeks after the finale that he started to second-guess whether this was the right thing for him.

In his comments, he said: “We just stopped clicking… Communication broke down…It was like, ‘What’s going on right now?’ I fell in love with this woman, and then, like, I’m not saying that she changed into, like, this terrible person, but it just wasn’t the same.”

And it all came to a head when the pair had another massive argument while they were away together at Wango Tango. That is when Nayte decided to travel back alone to Austin since he could no longer tolerate what he was experiencing.

Once that was done, he made the decision to end things by giving her a call and the rest was history. His following comments confirmed as much: “And I just blurted out, ‘We’re not doing CMAs because I can’t be with you anymore.’ So yeah, I broke up with her over the phone, which is a dick move.”

Nevertheless, the fans on social media did not have an entirely positive view of Nayte. A certain subset of people were of the view that his conduct in the break up demonstrated exactly why he was not a good match for Michelle.

One person wrote: “Someone needs to give the guy a few grammar lessons.  Michelle was too good for him.” Looking back it was probably just as well that they went their separate ways.  So there you have it folks. What did you think about this? Let us know your thoughts in the comments section below.