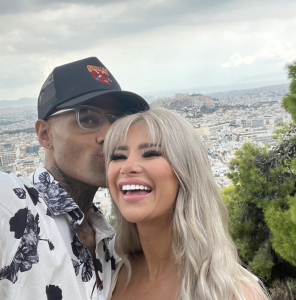 Former star of ‘The Bachelorette’ Grant Kemp has gotten engaged to his girlfriend Chloe Metcalfe.

‘The Bachelorette’: Grant Kemp And Chloe Metcalfe Get Engaged

Grant first introduced himself to the fan base when he appeared on JoJo Fletcher’s season of the show. While that may have been the case, he failed to win her over as he was sent home during the 5th week.

His journey did not end there, though, as he later appeared on Bachelor in Paradise. He ended up getting romantically involved with  Lace Morris, only for their engagement to last around two months.

But with that now behind him, he can look forward to his new life with Chloe. In the picture here, we can see Grant holding Chloe as she shows off her engagement ring. They have massive smiles on their faces and could not be any happier.

The post was captioned by the following comments: “The answer was yes.” And looking back, it was inevitable that the pair were meant to be together. Grant expanded on how he knew from the outset that Chloe was suited to him.

They had come across each other when Chloe was working on a music video shoot for one of Grant’s friends. And as that was only in April, it is fair to say that things have moved quite quickly. And yet, Grant is adamant that he has made the right choice.

His following comments confirmed as much: “I knew when we started dating that she was the one – I just needed to find the best time to ask her to marry me. She had a lot of tears in her eyes but at the same time, had a huge smile on her face.”

The fans on social media wished them the best for the future. And in the process of doing so, they sent some very warm words indeed. One person wrote: “Congrats buddy. Happy that your happy.”

It is great to see the couple in a really good place and long may that continue. So there you have it folks. What did you think about this? Let us know your thoughts in the comments section below.