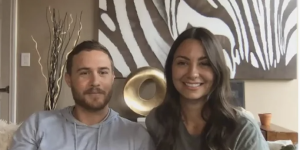 Former stars of ‘The Bachelor’ Peter Weber and Kelley Flanagan are allegedly back together again.

The Bachelor: Peter Weber And Kelley Flanagan Defy Odds To Get Back Together

According to reports, the duo have been spending more time together this summer which has led to a reconciliation. Speculation first emerged when the pair were seen  watching a baseball game featuring the Chicago Cubs in Illinois, which just so happens to be Kelley’s hometown.

In the picture here, we can see the pair standing next to each other as they pose from the stadium. They have massive smiles on their faces and could not be any happier. With that being said, a source confirmed the following: “[They] rekindled their romance this summer and have been spending a lot of time together since then.

“[They had] a lot of fun together.” This was a shock to say the least following everything that had happened with the pair prior to this. During the course of ‘The Bachelor,’ Peter sent Kelley home and decided to propose to Hannah Ann Sluss.

They would call it quits thereafter, as Peter hooked up with Kelley. But they broke up when they were supposed to move in with each other. And that was something that hit Peter very hard.

In his comments at the time, he stated: “Love is a funny thing. It can make you feel on top of the world and it can make you feel a pain you wish didn’t exist. I’m here to share that Kelley and I have decided to go our separate ways.”

The fans on social media were shocked by this revelation. A significant proportion of fans did not see it coming, which is why they were not sure if things could last. One person wrote: “You’re shi**ing me.” Hopefully, this time around the couple are able to work out their differences.

And since they are familiar with each other already, it could make things a lot easier. So there you have it folks. What did you think about this? Let us know your thoughts in the comments section below.