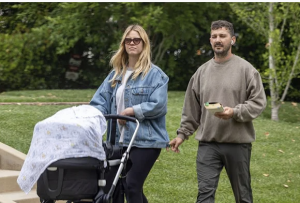 Shia LaBeouf looked comfortable with Mia Goth and their baby daughter, as they relaxed in Portofino, Italy during their vacation.

This sighting arrived amid the controversy that the actor had reportedly been fired from Olivia Wilde’s film, ‘Don’t Worry Darling.’ And yet, this was accompanied by a leaked video which demonstrated Olivia was desperate to have the actor on board.

While that may have been the case, Shia denied that he had been fired. Instead, he made it very clear that the filming scheduling did not make it possible for him to commit to the project.

And now that this controversy has been put behind him, he was seen enjoying his vacation. In the pictures here, we can see him and Mia enjoying a splash in the sea. They look fairly relaxed and could not be any happier.

The actor has come a long way since his prior demons. Shia has been known for having problems with his drinking, which did result in him getting on the wrong side of the law. This in addition to the fact that he let slip that he even considered suicide at one point.

But his life changed when he decided to convert to Catholicism amid his role as a monk in the movie ‘Padre Pio.’ And by the looks of it, it was a critical period in the actor’s life. His following comments confirmed as much: “I had a gun on the table. I was outta here.

“I didn’t want to be alive anymore when all this happened. Shame like I had never experienced before — the kind of shame that you forget how to breathe.” It is great to see Shia in a much better palace, and hopefully for the couple going forward, things continue to say that way.

After all, they do have a daughter that they have to look out for.  So there you have it folks. What did you think about this? Let us know your thoughts in the comments section below.