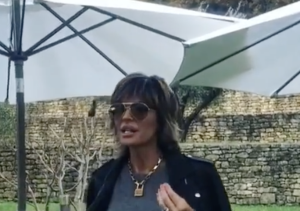 “Real Housewives of Beverly Hills” star Lisa Rinna has revealed that she received threats which she will speak about on the show’s reunion.

Real Housewives of Beverly Hills: Lisa Rinna Reveals She Has Received Threats ‘For The Past 4 Months’

Lisa, for her part, did not go on to state which person was responsible for such behaviour. However, she did let everybody know that things were not right as she shared a message, allegedly sent to her by Kathy Hilton, which said the following: “Please not say anything we discussed.”

With that being said, it is clear that Lisa has a lot to get off her chest, something which she hopes to do. In her comments, she said: “I have been ‘threatened’ for the past 4 months by ‘people’ basically trying to scare me, trying to ruin my credibility. trying to call me a liar, creating things that aren’t true and don’t exist.

“But guess what? Today we’re going to sit down and we are going to talk about it all.” Things have also not been helped by Lisa’s social media activity. She allegedly has unfollowed a huge amount of the cast members involved, including Garcelle Beauvais, Sutton Stracke and Crystal Kung-Minkoff.

And all of this has come shortly in the run-up to the reunion which is bound to raise many talking points. Not only that, but Lisa has also expressed her grievances towards the show. This was on the basis that she did not feel they respected the passing of her mother, which was only recognised on the show with one episode.

While some might argue that the housewives franchise is ultimately about entertainment, Lisa did not take that well. In her comments at the time, she stated: “Got one episode of grace. That’s it, Lois deserved and deserves much more. Shame on everyone.”

Time will tell how the reunion does pan out, but based on what we have seen so far, we can expect plenty of fireworks. So there you have it folks. What did you think about this? Let us know your thoughts in the comments section below.