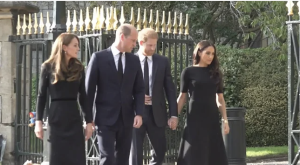 Prince Harry and Meghan Markle’s public display of affection at the procession of the late Queen Elizabeth II has gotten many people talking.

The couple are known for not being shy over showing how much they care for each other. And as part of that process, they are often seen holding hands. And it was no exception here.

In the picture, we can see the couple walking behind Prince William and Kate Middleton. They all have an expression of sadness on their face and that was accompanied by the Sussexes holding hands.

This generated many talking points for the following reasons. First of all, William and Kate in comparison have been criticised for not being as intimate as the Sussexes in public.

It is not surprising that the fans on social media had a lot to say about the matter. A certain subset of people were of the view that this highlighted how well the couple’s relationship was doing.

Meanwhile, others felt this demonstrated a lack of respect since they were meant to be paying respects to the late monarch.

One person wrote: “Meghan & harry have such a special & amazing bond that no one can ever take away from them,” while another person stated: “They’re part of the procession.

“Is it too much to expect them to walk in their line? Even the horse could stay in their position for 20+ minutes walk. Yet Meghan [and] Harry couldn’t keep the formation at least until they reach the door?”

It is safe to say that not everyone was best pleased with Harry and Meghan’s approach. So there you have it folks. What did you think about this? Let us know your thoughts in the comments section below.