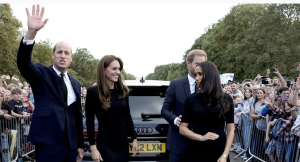 That is according to psychic and body language expert Inbaal Honigman. Her comments were made in relation to the four of them uniting in order to pay respects for the late monarch Queen Elizabeth II.

And as part of that process, they walked together which drew many observations. Harry and Meghan were holding each other’s hands, while William and Kate simply walked side by side.

In her comments, Inbaal said: “Harry and Meghan are grieving relatives and are under no obligation to follow royal protocol, they’re walking hand in hand like regular citizens, as a non-royal married couple would.”

This is entirely understandable since royal protocol does not make it feasible for William and Kate to do so. Not only that, but since William has now become the Prince of Wales, he ultimately has taken on more of a leadership role within the firm.

And with that, there are added responsibilities and expectations, with image playing a crucial part. Her following comment confirmed as much: “Notice how William is looking around. He is there in a public capacity.

“He may have just lost his grandmother, but his job, as the eldest son of the King, is more important right now, than his grief.” Nevertheless, the fans on social media had a different take on the matter.

A certain subset of people viewed Harry and Meghan’s interactions as demonstrating more than just affection. In the process of doing so, people began to question Meghan’s behaviour.

One person wrote: “She has to control him,” while another person stated: “Regular citizen don’t have mansions and don’t travel by private planes. Regular citizens no in a millions years.”

Regardless of what you may think, the most important thing was paying respects to the late monarch which they managed to do. So there you have it folks. What did you think about this? Let us know your thoughts in the comments section below.