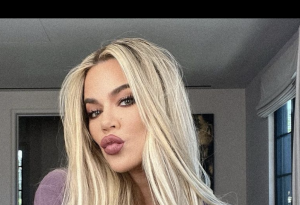 Khloe Kardashian became very emotional when she was addressing her second child that she had with ex Tristan Thompson.

The pair already had a daughter, True, but shocked their fan base when they announced that they welcomed their second child via surrogate. This was very hard to fathom, given that Tristan had shown he was not trustworthy in light of his numerous cases of infidelity that led to their breakup.

While that may have been the case, Khloe made it clear that the decision was taken so True would have a sibling. But for all of the justifications, it is clear that Khloe has had a difficult time digesting it all. In a preview clip of ‘The Kardashians,’ we can see that Khloe is getting emotional as she makes a confession.

She can be heard saying the following: “There is something I am ready to talk about… Tristan and I are having another baby. It’s supposed to be a really exciting time and it’s just a different experience.”

Khloe did not reveal what made her feel like this, but outside of an alternative explanation to the contrary, it could have been due to the following reasons. First of all, she has received a significant amount of backlash for this decision.

It is one thing wanting another child, but another thing entirely having one with a man that had betrayed her by fathering a child with another woman (Maralee Nichols). Secondly, given that Khloe has failed to settle down, this may be something that is playing on her mind.

And yet, Khloe vowed to make the best of things. Her following comments confirmed as much: “This has been a difficult time in my life but it’s the start of something positive and happy and beautiful.”

As long as Khloe is happy,  then who are we to question otherwise. And that is the most important thing to remember going forward. So there you have it folks. What did you think about this?