Skip to content
Home > Celebrities > Kanye West > Kanye West Hints He Has Not Gotten Over Kim Kardashian-‘London I Know How You Feel, I Lost My Queen Too’ 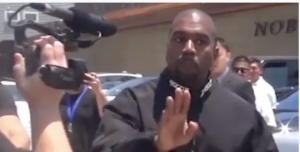 Kanye West has hinted that he still has not gotten over his split from Kim Kardashian.

Kanye West Hints He Has Not Gotten Over Kim Kardashian-‘London I Know How You Feel, I Lost My Queen Too’

The rapper has always made it clear that he would want to get back with the Kardashian for the sake of keeping his family unit together. After all, they do share four children. While that may have been the case, Kim has seemingly no intention of making that happen as they currently cooperate for the sake of co-parenting.

In addition, Kim has shown that she is looking to move on even if her relationship with Pete Davidson ended. With that being said, Kanye used the passing of the late Queen Elizabeth II to show how he had lost someone in his own life. In his post, he said: “London I know how you feel. I lost my queen too.”

While he did not mention the person that he was referring to, there is a strong likelihood that it was Kim. After all, he is currently single as his time with Chaney Jones appears to have died down. In addition, Kanye took things a step further when he posted a picture of the Kardashian at Milan Fashion Week.

In the picture here, we can see that Kim is wearing a long, silver dress with a matching handbag. And since they are no longer together, it was bizarre for Kanye to share such a photo.

And yet, there is a possibility that Kanye was referencing the passing of his mother Donda. The fans on social media had a lot to say about the matter. A certain subset of people did not view Kanye in a positive light.

One person wrote : “Who gives a flying fig about Kanye. The man is a joke supporting a criminal just so he can feed his own ego. Just like the clown that was voted out of office in 2020.”