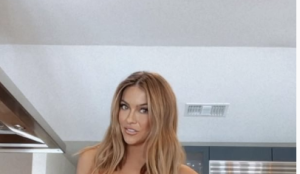 Chrishell Stause blasted a social media user who questioned her stance on having children in light of her relationship with non-binary musician G Flip.

However, they split up after suggestions that he was not ready to have children, something which Chrishell apparently wanted to do. But now that she is with G Flip, some have questioned her conduct.

In the picture here, we can see Chrishell is holding the hands of G Flip. They have massive smiles on their faces, as they walk in the road. The post was captioned by the following comments: “My heart.”

That post caught the attention of one social media user who responded by stating the following comments in response: “You didn’t want to have children?” That clearly touched a nerve, as Chrishell responded and let everyone know in no uncertain terms that she did not want to speak about her personal life.

This is entirely understable since she may want to keep her private life away from the spotlight, but in any event, it highlighted the comment even further. In her reply, Chrishell remarked: “Please stop asking me this. At least this one didn’t include hate I refuse to give a voice to by reposting.”

This is something that Chrishell will have to navigate, since G Flip has made it clear that children are a priority. Whether that ends up happening now or later down the line is immaterial since the musician was very vocal about it.

The following comments confirmed as much: “I love children. I was a music teacher for years before I became a session drummer and then a solo artist. So I was like, I’ve always loved kids and yeah, definitely one day that’ll be in the future.”