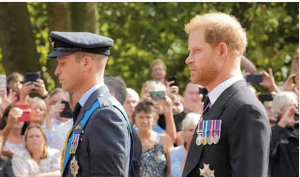 Prince Harry and Prince William allegedly had dinner together after receiving the coffin of Queen Elizabeth II.

According to reports, the pair attended a meal inside Buckingham Palace. During the course of that process, Kate Middleton and Meghan Markle were also allegedly present. This was a significant moment since it increased hopes that the royals would be able to bury their differences and patch things up with the Sussexes.

While it is not exactly clear if this was just done as a sign of respect for the sake of the late monarch, the fact of the matter is that it was still a positive step in the right direction.

This begs the question: how will the Sussexes proceed with the Royal Family going forward? Harry’s tell-all memoir is still expected to come out in November, according to Tom Bower, which dispels any hopes that a reconciliation will occur.

After all, the last thing that the royals need is more disclosures being made at a time where the family is in mourning. Not only that, but even those close to the Sussexes have stated their desire for the couple to reunite with the firm.

Oprah Winfrey, who just so happened to undertake the controversial interview with the duo, had this to say: “When all families come together for a common ceremony, the ritual of, you know, burying your dead, there’s an opportunity for peacemaking. Hopefully, there will be that.”

The fans on social media were hopeful that a reconciliation was possible. A significant proportion of them felt that it was time to put things behind them in light of everything that had happened. One person wrote: “Hope this FAMILY can heal and make new beginnings. Time to let go of the past.”

Time will tell how this plays out going forward, but the dinner could be the start of something new for the brothers. So there you have it folks. What did you think about this? Let us know your thoughts in the comments section below.