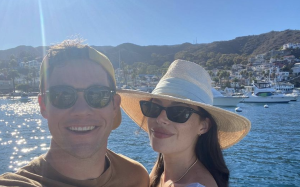 Adam Devine trolled Maroon 5 lead singer Adam Levine by letting people know that they should not confuse them in light of the singer’s DM scandal.

Adam Devine Trolls Maroon 5 Lead Singer Adam Levine-‘My Wife And I Are Doing Great, I Am Not Adam Levine’

The musician has found himself in hot bother after a series of women came forward to suggest that he was sending them flirtatious messages. This is despite the fact that Levine is married to Behati Prinsloo.

And as part of that process, things have not been helped since Instagram model Sumner Stroh alleged that she had an affair with Levine, even though he denied it. And to make matters even more burdensome, Behati is expecting her third child with Levine.

With that being said, Devine let everyone know that he is happy with his wife Chloe Bridges. In a post to his fans on Instagram, Devine shared a picture of the two near the sea. The sun is shining, as they both pose for a selfie. They have massive smiles on their faces and could not be any happier.

The post was captioned by the following comments: “Just want to post this and say that my wife @chloebridges and I are doing great and going strong. I am not Adam Levine. He’s a different guy and a worse singer. We are however naming our future baby Sumner.”

The fans on social media could not help but laugh about the matter. A certain subset of people decided to make a running joke out of this. And in the process of doing so, the comments were mocking indeed. One person wrote: “Wait, so who tf is Adam Levine,” while another person stated: “Always get these two confused.”

It is fair to say that Levine has become somewhat of an internet sensation for all the wrong reasons. And that is not going to be changing any time soon until the story dies down. So there you have it folks.