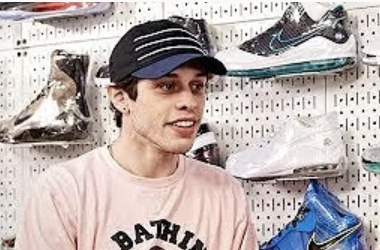 Pete Davidson was seen getting some shopping therapy following his split from Kim Kardashian.

The pair called it quits after 9 months of dating during which Pete made it very clear what his intentions were. He admitted that he was willing to marry Kim, as well as expanding on his wishes of becoming a father one day.

And yet, those aspirations have been crushed, at least for the time being. But that has not stopped the comedian from continuing to plough on. He was seen celebrating his sister’s graduation and shooting hoops on the set of his upcoming film ‘Wizards.’

With that being said, Pete decided to include some shopping too. In the picture here, we can see him making a visit to Target in Cairns Central Mall, Australia. He has a mask on his face, while he holds a pair of sunglasses in his hands after having exited his hotel. He does look a little tired before he makes his way to his car.

It is not exactly clear what Pete was looking to buy, but one thing for sure is that he does have an intense schedule. And by the looks of it, this played a part in the pair deciding to go their separate ways. When Pete would be in Australia, the pair would keep in touch via facetime.

But the long distance was too much to navigate, despite Pete’s attempts to make it work. That was not the only factor, though. It appears that the huge age gap between the two played a major key. Pete, for his part, is 28.

Meanwhile, Kim is in her forties coupled with the fact that she is a mother to four children. As a result, it was not surprising that they would have different priorities within their lives. A source confirmed the following: “[Kim ended things because of Pete’s] immaturity and young age.”