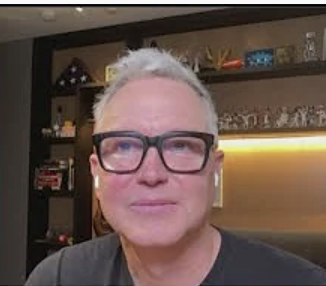 Mark Hoppus admitted that he considered committing suicide during his cancer battle in 2021.

The musician had been diagnosed with stage 4 lymphoma in 2021.  During the course of that process, Mark underwent extensive chemotherapy in order to tackle the problem.

But the news of his cancer diagnosis had been leaked accidentally on social media when the star decided to post a picture of himself with the caption, “Hello, yes. One cancer treatment please,” that was meant to be for his friend only. But after having made it public by mistake, the news was there for all to see.

And through those dark moments Mark considered ending his life. In an interview with People magazine, he said: “I was in our living room crying and telling my wife, ‘I don’t know if I can do this. She was like, ‘Well, what are you going to do, kill yourself?’

“And that’s exactly what I was thinking. It was pretty dark.” But by having a good support network by his side, Mark was able to navigate those issues. He was able to rely on his wife, Skye Hoppus, with whom he had been married to for over two decades.

And it was her decisiveness that allowed Mark to snap out of that negativity, as who knows what could have happened on any other given day at any particular point had he acted spontaneously.

His following comments confirmed as much: “I was like, ‘What a s–ty thing to say.’ But also, what a kind thing to say, like, ‘Snap out of it, you f–king baby. You have a beatable form of cancer. It’s going to suck to get there, but get there.’ I had to do the work.”

Thankfully, Mark did not end up doing anything that he regretted. And that is the most important thing to remember going forward after everything that he had been through. So there you have it folks. What did you think about this?