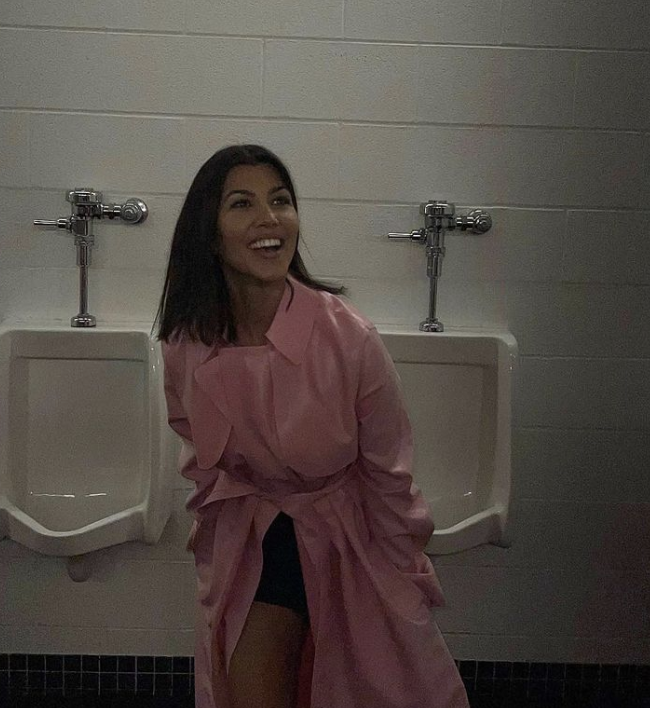 Kourtney Kardashian showed off her pink coat by modeling it in the men’s bathroom.

The Kardashian is known for her racy social media pictures, but this time around, it was the environment that she had posted in which got people’s attention. In the picture here, we can see that Kourtney is wearing a pink trench coat while she is backstage with her husband Travis Barker.

She is posing in the men’s bathroom, while she is standing in front of the men’s urinals. The post was captioned by the following comments: “Backstage.” This generated a lot of talking points in more ways than one.

First of all, if this is something that you fancy wearing yourself, then the coat can expect to set you back $1,475. That does seem excessive for a pink coat, but this is a Kardashian-endorsed coat nonetheless.

Secondly, the fact that the Kardashian was in the men’s toilet got many people talking. After all, Kourtney could have posed for the images anywhere other than a private area such as the men’s bathroom.

This is irrespective of the fact that she was with Barker during his tour, as the restroom could have been frequented by anyone at that time. In addition, it could have prevented any embarrassment that may have emerged had anybody walked in.

And this was reflected in the comments that followed on social media. A certain subset of people could not understand why Kourtney was in the men’s bathroom. Meanwhile, others began to troll Kourtney with some harsh comments.

One person wrote: “I love you but why are you in the mens bathroom !???” while another person stated: “Is that Travis’s urine.” Kourtney has shown time and again that she will continue to do what is best regardless of what others may have to say about it all.

And that is the most important thing to remember. So there you have it folks. What did you think about this? Let us know your thoughts in the comments section below. If you liked reading this article, then check out our other features on the Daily Soap Dish.