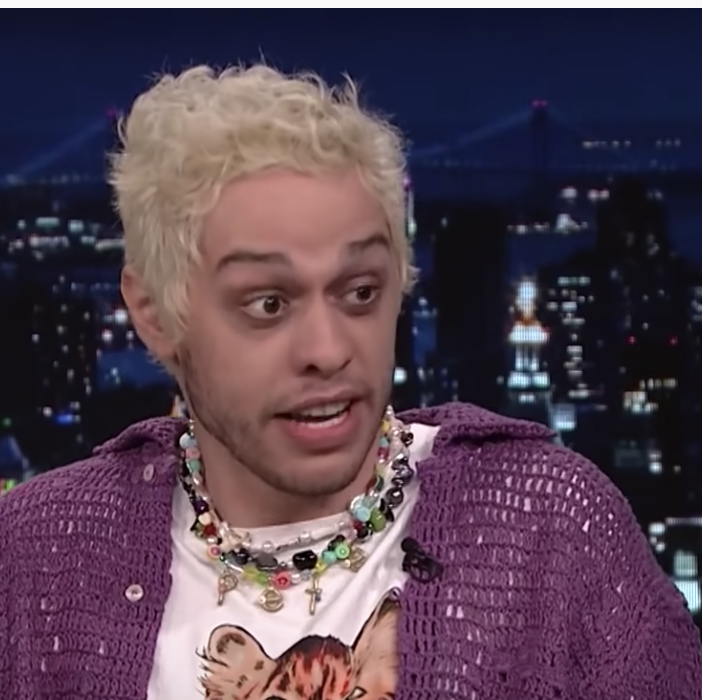 Pete Davidson showed that all seemed well when he was pictured walking around.

The comedian has been going through a lot of turbulence ever since he split up from his ex Kim Kardashian. The duo had been dating around 9 months before they decided to part ways. And in the aftermath of that process, things started to become very difficult for Pete.

He had to deal with Kim’s ex Kanye West, who told the comedian about the break up by posting the following headline which read ‘Skete Davidson dead at age 28.’ This did not go down very well, as reports confirmed shortly after that Davidson entered ‘trauma therapy’ to deal with the social media abuse.

Meanwhile, Kim was allegedly outraged that Kanye would do such a thing. And yet, Pete looked far from the man that was troubled in the following picture. In the picture here, we can see that he has arrived on set for his film’ Wizards.’

He is wearing an all-green top and a green cap. Pete has a smile on his face and puts a thumbs up in the air to show that everything is fine. Nevertheless, this picture has to be taken with a pinch of salt.

First of all, it is most likely that Pete wants to show a positive image in front of the cameras and not let people think that he has become overwhelmed. Secondly, he has the task of finishing the movie at hand. And nothing can get in the way of that, especially since Davidson’s movie career has recently started to take off.

Lastly, in any event, sources at the time made it clear that Pete was affected by the social media antics. A source had said: “The attention and negativity coming from Kanye and his antics is a trigger for [Pete], and he’s had to seek out help.”

Time will tell how Pete overcomes this and moves forward. So there you have it folks. What did you think about this? Let us know your thoughts in the comments section below.