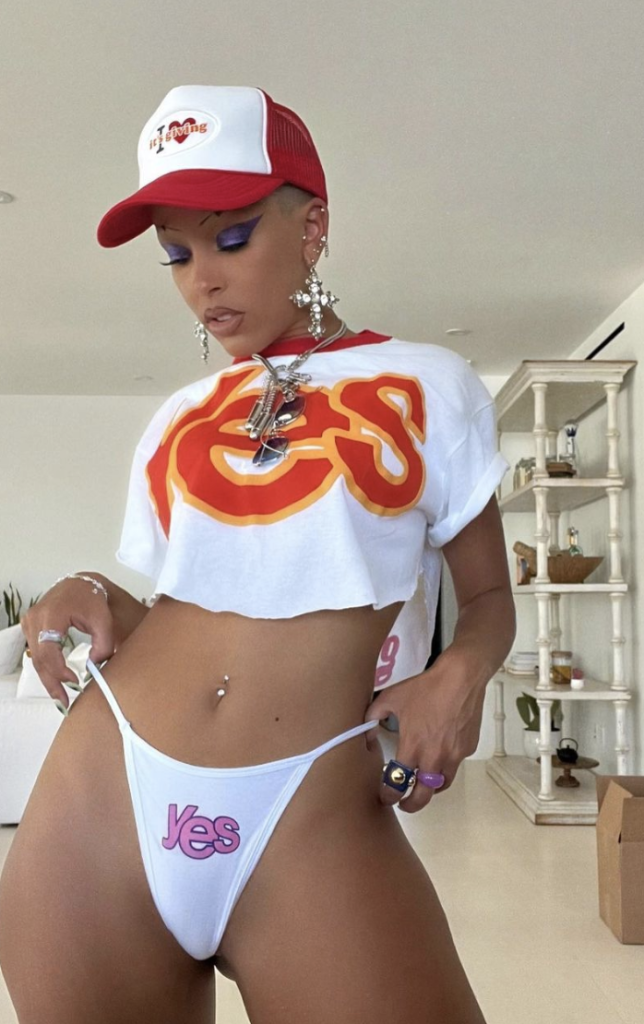 Fans have reacted to Doja Cat wearing a thong publicly.

The star is known for making outlandish changes when it comes to her appearance after having recently received backlash over her decision to shave her head and eyebrows. During the course of that process, Doja hit back at her critics who accused her of having gone too far for attention.

In some prior comments at the time, she remarked: “I make hit after hit after hit and you all want me to look f—kable for you so that you can go home and jerk your c—ks all day long while you live in your mothers [sic] basement.”

Much in the same way, Doja certainly turned heads in the following picture. In the picture here, we can see that she is wearing a t-shirt. But it is the bottom half of her outfit that drew a lot of attention. She is donning a white thong with the words ‘yes’ written on it, which has partly been covered up with a pair of denim shorts.

If the thong is something that you fancy, then it can expect to set you back $25. This just so happens to be from Doja’s clothing line entitled ‘ It’s Giving.’ Despite Doja’s willingness to make audacious fashion statements, the fans on social media had a lot to say about her appearance.

A significant proportion of people could not understand why the star would dress like this publicly. And as a result, they began to troll the star. One person wrote: “$25 dollars for a thong?? I can get an entire pack of thongs for like Ten Bucks,” while another person stated: “Doja Cat in a thong was pretty bad.”

It is safe to say that Doja will do what she feels is best, irrespective of what others may have to say about it all. And that is not going to change anytime soon. So there you have it folks. What did you think about this?