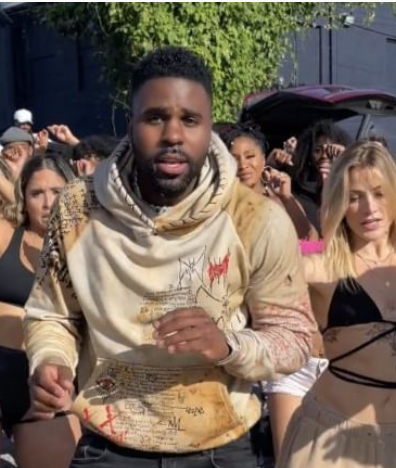 Jason Derulo was left watching his ex Jena Frumes, and mother to his son, command the catwalk during Miami Swim Week.

The pair ultimately parted ways last year after allegations that Jason had been unfaithful to Jena on numerous occasions. The news was shocking to say the least, especially since these claims emerged four months after the birth of their son.

Not only that, but the pair had considered the possibility of getting married later down the line. With that being said, it is understandable if Jason had been left regretting what could have been. And this may have been going through his mind, as he sat during the catwalk watching Jena.

In the pictures here, we can see that Jena is walking down the catwalk. Jason is in the audience holding his son, as he looks into the distance. Despite clearly looking downbeat, Jason had nobody to blame but himself for his predicament.

This is especially true when we look at how Jena felt in the aftermath of the claims that Jason was cheating. She did not hold back on how she was better off going her separate ways, even if it had the impact of causing her pain in the short term.

In some prior comments, Jena remarked: “It’s best to be single than to be in a relationship & constantly be disrespected & cheated on and lied to. No one aspires to be a single mom it’s the biggest heartbreak and failure for me personally.”

The fans on social media were equally condemnatory towards Jason. People were of the view that he had destroyed the family unit and had to live with the consequences that followed. One person wrote: “How do you cheat on Jena Frumes.”

Hopefully, this will teach Jason a lesson that he never forgets. And if he does manage to move on with someone else, then he will be in a better position to not do this again. So there you have it folks. What did you think about this? Let us know your thoughts in the comments section below.