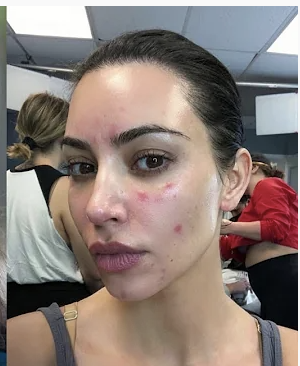 Kim Kardashian recalled suffering from psoriatic arthritis in the run up to the 2022 Met Gala.

The Kardashian already had a lot on her plate leading up to the event, as she admitted she had to lose 16 pounds in order to fit into her dress. After all, Kim was modelling a dress that had been won by Marilyn Monroe when she sang happy birthday to former United States President John F Kennedy.

But it appears that this was not only the issue, as Kim had to overcome psoriatic arthritis. This condition results in the joints becoming swollen, painful and the skin becoming itchy due to the psoriasis. And that was precisely the last thing that she needed when she was walking out in an iconic dress.

In an interview with Allure, Kim said: “Psoriasis broke out over my body and I got psoriatic arthritis so I couldn’t really move my hands. It was really painful, and I had to go to a rheumatologist who put me on a steroid. I was freaking out.”

This is not the first time that Kim has suffered from psoriasis. She has been very vocal on this issue in the past with her fans. In a picture here, we can see that Kim is lying on her bed. Her face is covered in red patches that demonstrate very dry and flaky skin.

The post was captioned by the following comments: “Morning psoriasis.” Nevertheless, the fans on social media were not that sympathetic. In fact, a certain subset of fans began to troll the Kardashian simply because they had similar problems too.

One person wrote: “Kim Kardashian also has psoriasis.. so can she pls make it a trend to have a scabby head cos this shit be embarrassing.” As long as Kim has found an answer to tackling this, then that is the most important thing regardless of what others have to say.