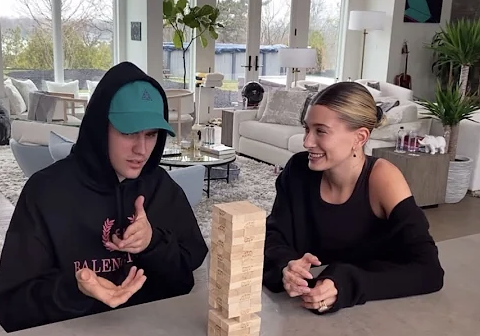 Justin Bieber and Hailey Bieber were pictured making out amid the former’s recent diagnosis with Ramsay Hunt syndrome.

Justin, for his part, has been taking some time away from the music scene after confirming that he was not able to conduct his upcoming shows due to the diagnosis. As a result, he has been seen getting very close with Hailey of late.

They were recently pictured attending church together in Los Angeles, as Hailey lived up to her words in standing by her man when the news of the diagnosis first broke. And in order to show just how close they are with each other, they were packing on the PDA during some alone time together.

In the pictures here, we can see the pair enjoying some time in the sun as they lie on their boat. The boat was situated in Coeur d’Alene, Idaho, as they passionately kissed each other. They happened to be joined by some close friends, as they took in the sunshine and jumped in the water too.

It is not exactly clear how long this condition is going to keep Justin out for, but pictures like this demonstrate that he looks to be on the mend. And this fits in line with his prior comments in which he stated that he started to feel a lot better.

While that was primarily based on the fact that Justin was getting philosophical and keeping his faith with God intact, it did demonstrate a positive mindset nonetheless. In some prior comments, Justin remarked: “Through all of the discomfort I have found comfort in the one who designed me and knows me.

“I’m reminded he knows all of me. He know the darkest parts of me that I want no one to know about.” It is great to see the couple standing by each other during these difficult moments, and hopefully, Justin is able to push through.