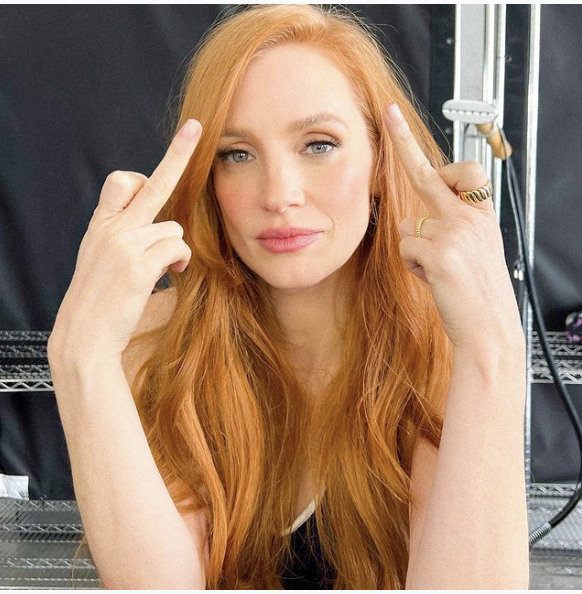 ​​Jessica Chastain has defended Florence Pugh in light of criticism over her outfit at the Valentino Haute Couture show.

Jessica Chastain Defends Florence Pugh For Exposing Her Breasts In Barbie-Style Dress-‘Why Is It So Threatening?’

Florence, for her part, caused mass controversy when she wore a Barbie-style dress.   In the pictures here, we can see that the dress is in all-pink. However, the material surrounding her breast area is see-through which exposed her nipples.

As a result, she was heavily criticised on the basis that her clothing led to the objectification of women. Not only that, but others found her outfit rather distasteful. With that being said, Jessica  came out and hit back at Florence’s haters.

In a post to her fans on Instagram, Jessica reshared a picture of Florence wearing that dress. The post was captioned by the following comments: “Why is it so threatening for some men to realize that women can love our bodies without your permission? We don’t belong to you.”

Jessica was not the only one to come out and back the star. Former star of the hit TV show ‘ Bridgerton’ Regé-Jean Page slammed the comments aimed at Florence. He was of the view that a certain subset of men had crossed the line and urged them to take a look at themselves.

Nevertheless, not everybody on social media was pleased with what Jessica had to say. This was on the grounds that they felt she was trying to politicize the issue and make it into a male vs female dichotomy.

One person wrote: “Girl…you know damn well it wasn’t the men talking about your sheer Valentino gown, it was mostly women and probably thinking why you didn’t have any nipple covers on or something.”