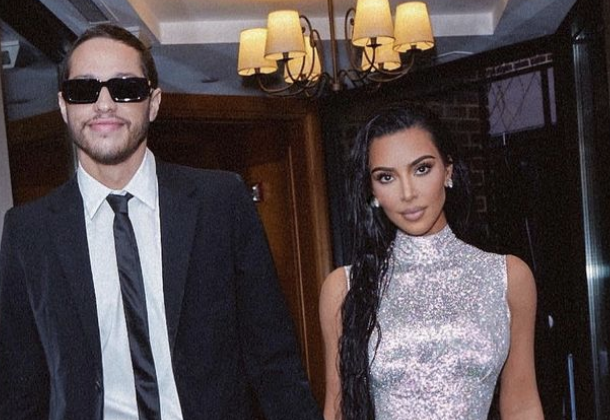 Kim Kardashian and Pete Davidson were showing off another instance of a public display of affection as they were pictured holding hands.

Kim and Pete arrived back in the US after having been in the UK in the run up to Queen Elizabeth’s Platinum Jubilee.  Despite conflicting reports emerging over whether Kim had wanted to attend the Queen’s Platinum Jubilee Party, before allegedly being turned down, it was all smiles for the couple back at home.

In the picture here, we can see them walking out in the street side by side. They are holding each other’s hands, as they show off their matching blonde hair. Not only that, but they both appear to be wearing black clothing too. They have huge smiles on their faces and could not be any happier.

With that being said, reports have also stressed that the couple are looking to take their relationship to the next level by moving in together. Although it is not clear if this is forthcoming, the decision is bound to generate a lot of talking points for the following reasons.

First of all, Kim’s ex Kanye West has already made it clear that he does not want Pete to get involved with his kids. Therefore, if the couple are living together, there has to be a compromise of some sort.

Secondly, if they do move in together, then based on Kanye’s prior social media track record, he is bound to have something to say about it. And yet, the couple are ignoring any background noise that is coming.

A source confirmed as much: “Their relationship continues to grow. They’re very secure with their relationship and talk future plans and moving in together. They’re looking forward to vacationing together this summer and having romantic alone time. He just wants to make her happy.”

Bearing that in mind, it is a very crucial period for Kim and Pete’s relationship. So there you have it folks. What did you think about this? Let us know your thoughts in the comments section below.