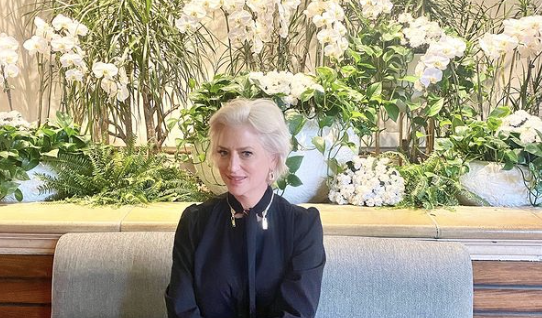 Dorinda Medley has once again blasted Vicki Gunvalson following the star’s prior criticism of her home.

Vicki, for her part, was not impressed with Dorinda’s home as she referred to it as being ‘old.’ While that may have been the case, Dorinda defended it on the basis that it had been recognised by “Architectural Digest” magazine.

As a result, Dorinda responded in kind by shading Vicki’s love life and referencing her prior failed relationships including one with her ex-boyfriend Brooks Ayers. He had allegedly faked documents to make it appear as though he had cancer.

And this time around, Dorinda showed everyone who was ‘old’ and not relevant as she focused on Vicki’s face on a promo picture of the “Real Housewives Ultimate Girls Trip Ex-Wives Club.”

In a post to her fans on Instagram, Dorinda edited the picture by placing Vicki’s face next to the words ‘archdigest and the bluestone manor.’ The post was captioned by the following comments: “Who in this group picture doesn’t understand the difference between ‘Old’ and ‘Historic’? (I tagged her to make it easy). Excited for the show?”

Clearly, Dorinda has taken those comments personally. And she did not shy away from expressing just how much condemnation she had for Vicki. After all, as Vicki’s love-life has been such a disaster in the past, she was not necessarily in the best place to comment on people’s taste.

And in the process of doing so, she highlighted Vicki’s prior behavior. She stated: “Well, listen, this is a girl that thinks dancing on dirty tables in a bar at Puerto Vallarta, whatever that place is called, is fun.”

The fans on social media sensed that things could get out of hand. That is why they expected major fireworks to happen if this animosity was not reigned in. One person wrote: “Dorinda is less volatile than Vicki, this is gonna get ugly quick.”

It is safe to say that the duo do not see eye to eye. So there you have it folks. What did you think about this? Let us know your thoughts in the comments section below. If you liked reading this article, then check out our other features on the Daily Soap Dish.