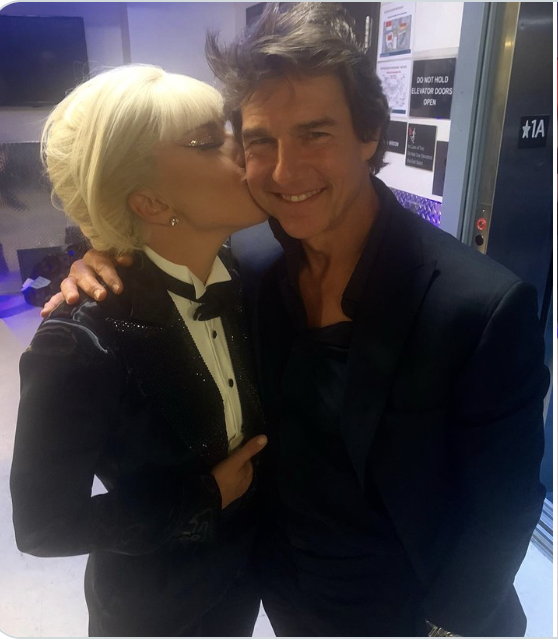 Lady Gaga had a night to remember as she ended up exchanging kisses with none other than Tom Cruise.

According to reports, the singer was performing at the Park MGM, Las Vegas on Sunday, 1st March 2022.  And it was during the course of that performance that Tom decided to pop down. While it is hard to believe that Tom is a Gaga fan, the fact that he ended up going backstage suggested that he knew her very well.

And this was reflected in the following pictures. In the images here, we can see that the two are backstage. In the respective photos, Gaga is seen kissing Tom on the cheek, while he reciprocates it in the other photo.

The post was captioned by the following comments: “Thank you for coming to the show last night. I love you my friend.” But Tom’s appearance could also have had another motive. Lady Gaga has actually released a new single entitled ‘Hold My Hand.’

And this track has ended up becoming the soundtrack for the new ‘Top Gun 2’ movie. Therefore, it would make sense for Tom to support the single as much as possible.

And in the process of doing so, it could lead to more people tuning in for the movie. And by supporting each other, it has led to a single that has people having high hopes for it.

That is why Gaga had nothing but warm words to say about Tom, who made this possible. In a prior post to her fans on Instagram, Gaga remarked: “I’m so grateful to Tom… for this opportunity — and it’s been a beautiful experience.

“Me, BloodPop, Ben Rice and everyone else who worked on it with us are so excited to share it with you. This song is a love letter to the world.” With that being said, it will be fascinating to see how well the single does. Time will tell. So there you have it folks.