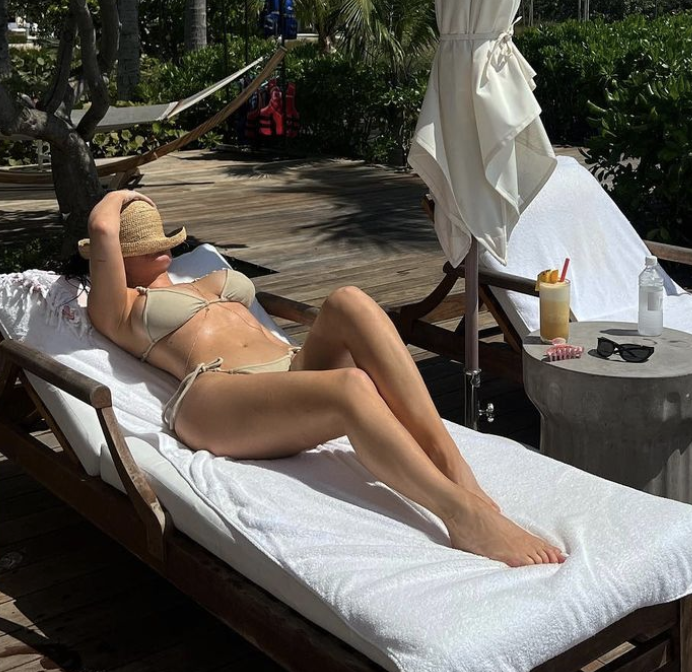 Kylie Jenner has shown that her body is getting back to what she wants in the aftermath of her pregnancy.

The reality TV star welcomed the arrival of her second child in February of this year. And ever since that moment, Kylie opened up on the amount of weight that she had put on. So much so that she claimed to have put on 60 pounds, as a result.

Clearly, Kylie was going through a very hard time. In her comments at the time, she remarked: “I just want to say to my postpartum moms that postpartum has not been easy. It’s very hard. It’s not easy, mentally, physically, spiritually, it’s just crazy.”

But after having made the decision to shed those pounds, Kylie was delighted to show off her physique. In a post to her fans on Instagram, Kylie shared a picture of herself sunbathing.

She is wearing a grey bikini, as she lies down on a sun-bed with her face covered with a hat. Her abs are clearly visible, as she soaks up the sun. The post was captioned by the following comments: “Piña colada please.”

This post arrives on the back end of Kylie and Travis Scott going to Turks and Caicos this week in order to have some downtime. And as well as having had a great time, her daughter Stormi was also happy to have tagged along.

With that being said, sources stress that Stormi was delighted to be able to hang out with her new sibling. A source stated: “Stormi has been helping out and is so excited about being a big sister. [It has been] all been non-stop smiling.”

Kylie has put in a lot of hard work to bounce back from her post-pregnancy struggles. And now that she has done so, she has every right to enjoy her life to the fullest. And as for what’s next, there is plenty of sun for her to enjoy. So there you have it folks.