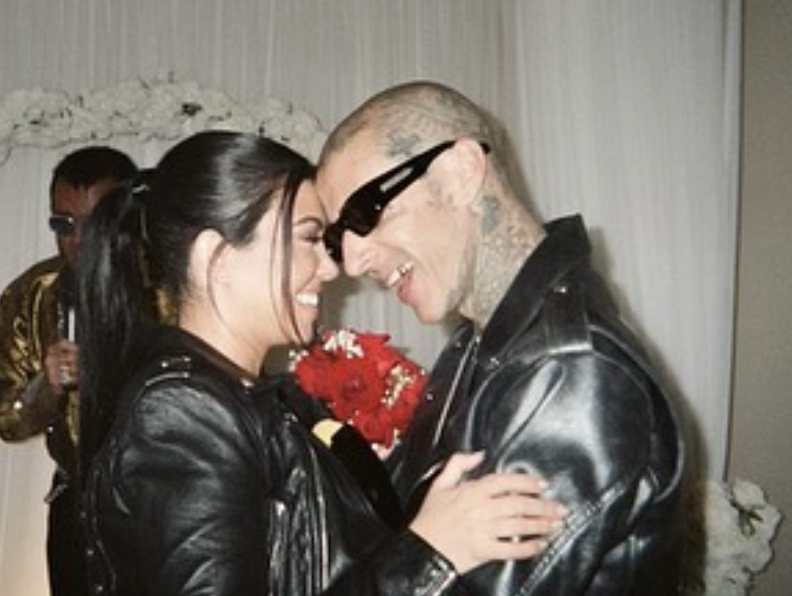 Kourtney Kardashian And Travis Barker Are Officially Married-‘Once The Confetti Settles, It’s Over’

The news was a long time coming ever since the pair had decided to elope to Vegas just last month only for that ceremony not to be legally binding due to the absence of a marriage licence.

But now that they have made things official, they can focus on moving to the next stage of their relationship. According to reports,  the couple decided to walk down the aisle in Santa Barbara, California.

In the pictures here, we can see that Travis is wearing a traditional suit. Meanwhile, Kourtney has also kept things traditional, having a white wedding dress, even if there is a twist on it, as shown by the hood on the top of the dress.

And as the ceremony was concluded,  they rode off into the sunset with a car that had the words ‘ just married’ written on some cardboard that was stuck on. Alongside them, Kourntey’s grandmother Mary Jo and Travis’ father   were on hand in order to ensure that everything went smooth sailing.

With that being said, the pair have most likely gone off to enjoy their honeymoon. And with that, a lot of people had something to say about the matter on social media. A significant proportion of people were of the view that the relationship would not last in the long term.

This was on the grounds that it was characterised by excessive PDA, which was bound to come to an end in the long term. Meanwhile, others felt that Kourtney’s motivation for the wedding was questionable amid rumours that she was pregnant, thus speeding up the process.

One person wrote: “She’s pregnant. She keeps holding her purse in front of her stomach. I think that’s why they rushed the wedding,” while another person stated: “Their relationship is all about lust, not love. Once the confetti settles, it’s over.”

Time will tell if the couple can last the course. So there you have it folks. What did you think about this? Let us know your thoughts in the comments section below. If you liked reading this article, then check out our other features on the Daily Soap Dish.