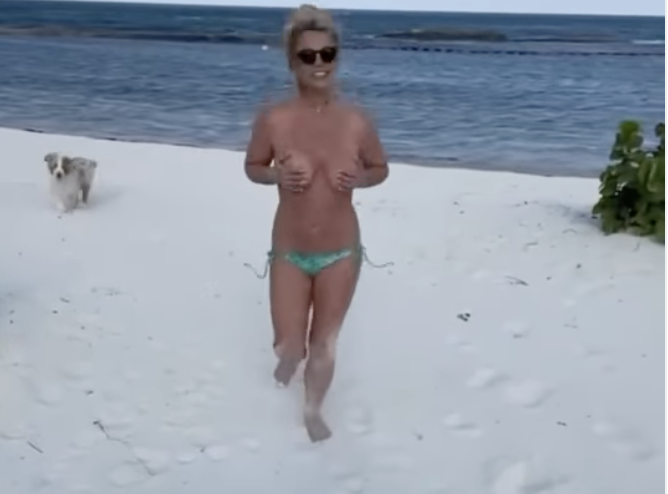 Britney Spears has been attempting to move on from her miscarriage by sharing a video of her doing a nude ‘Baywatch’ beach run from her recent Mexico holiday.

The star’s miscarriage did put a dent in her plans to start a family with Sam Asghari. With that being said, Britney will need to make sure that this incident does not lead to her life spiraling out of control.

And in keeping with her tendency to share nude posts, Britney posted a scene that could be reminiscent of ‘Baywatch.’ In the video here, we can see that Britney starts off by sitting on the beach floor, as she wears her green bikini.

She then moves her panties a little to show a sneak peak before standing up to do the same. She then proceeds to run from one end of the beach to the other with her dog behind her, as she is topless.

In the process of doing so, Britney holds her breasts. The clip concludes with her lying down, while the dog jumps on her, as Britney then stands with a big smile. The post was captioned by the following comments: “Trying to be sexy running like Baywatch !!!! Pssss #TB to Mexico!!!”

The reaction to this post on social media was very mixed. A certain subset of people were happy to see Britney letting herself loose. Whilst others questioned whether she was in the right frame of mind. After all, the news of her miscarriage is still very fresh in the memory.

And given that her immediate family has not reached out yet, or at least publicly, people felt something had to be done. One person wrote: “Someone needs to help Britney. Her dad was a bad choice, but clearly she needs help.”

Hopefully, Britney can work things moving forward. And the fans will support the star every step of the way. So there you have it folks. What did you think about this? Let us know your thoughts in the comments section below.