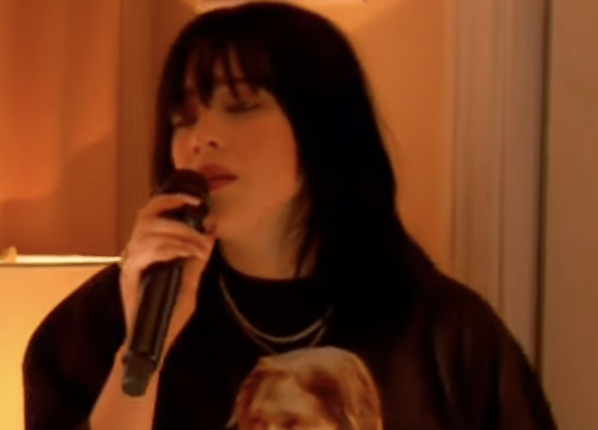 Taylor, for his part, was found dead in a hotel room in Colombia. The initial reports indicated that he may have died as a result of a drug overdose because the authorities had allegedly found 10 substances in his room.

His cause of death has been confirmed, with the autopsy stating he had a cardiovascular collapse. And given that Taylor had been penciled in to perform at the ceremony, his absence was naturally felt.

In the picture here, we can see that Billie is wearing a t-shirt with Taylor’s face on it. She is performing the song ‘Happier than Ever,’ as it is clear that she is quite emotional. The singer’s actions are not a surprise when we look at her reaction at the time that the news had broken.

She was very frank over how Taylor’s death had touched a nerve, especially since nobody saw it coming. In a statement at the time, she said: “I wish we got to spend more time with him, but he couldn’t have been a kinder, cooler, more generous person as well.

“And such a deeply inspiring person. We’re just heartbroken.” The reaction from the fans on social media was mixed. A certain subset of people praised Billie for going out of her way to remember Taylor. Meanwhile, others were of the view that by wearing a t-shirt, it did nothing to honour a man that had made a huge contribution to music.

One person wrote: “Honoring, or paying tribute, is WAY more than wearing a t-shirt with their picture on it. In fact, that’s shameful if that’s your representation of honoring.”

Regardless of what you think about Billie’s actions, the most important thing to remember is the impact that Taylor had on his fans. And the best way to remember him is through the music that he had created. So there you have it folks. What did you think about this? Let us know your thoughts in the comments section below.