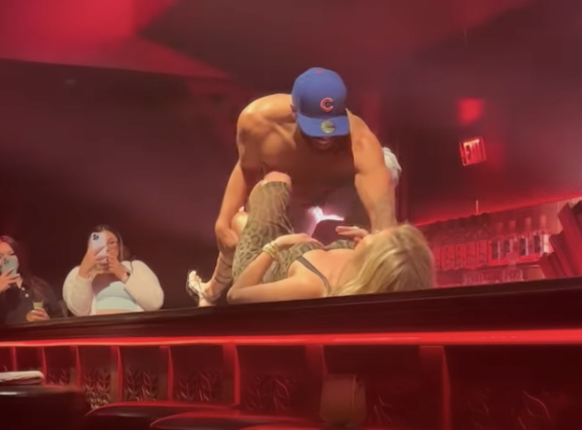 Kristin Cavallari shocked her fans when she appeared on stage with a male stripper during a live performance.

According to reports, Kristin was on the stage during the course of a ‘Magic Mike Live’ show. This occurred at the Sahara Hotel, Las Vegas in which she got herself a lap dance.

In the video here, we can see that the stripper is putting some whipped cream in his mouth, as well as on Kristin’s body. She lies flat on stage, as he proceeds to lick it off her.

It is not exactly clear why Kristin would decide to do this, but one thing for sure is that she did not regret it at all. In a post to her fans on Instagram, she addressed the video. She responded simply with the following words: “Good times. thanks for having me!”

But this was just the start of it. After the performance had concluded, Kristin decided to go backstage and get closer to the other strippers. In the pictures here, we can see that she is posing for photos with the shirtless men. Given by the expression on her face, she happens to be having a great time.

Nevertheless, the response on social media was not very kind. A large proportion of people were of the view that Kristin lacked class, given where she has now ended up following her split from Jay Cutler.

Not only that, but a handful of people were just disturbed by what they had seen. After all, Kristin is a mother to three kids. One person wrote: “People losing homes and getting killed…meanwhile in Hollywood,” while another person stated: “I’m disturbed.”

This is probably not Kristin’s finest moment. Regardless of what you may think about it all, it has one way or another generated a lot of publicity for the star. And that could easily be used for further clout.

By the same token, however, her actions may also alienate those who will find her conduct very distasteful. So there you have it folks. Did Kristen cross the line with her conduct, and do you think she will regret it down the line?