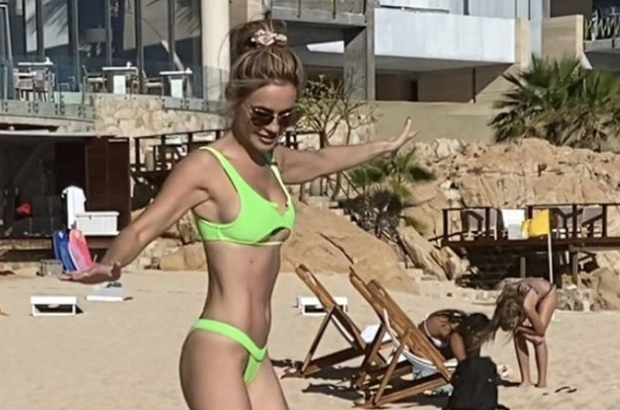 Chrishell Stause gained the ultimate revenge after a user on Instagram had decided to send her some of his nudes.

The Selling Sunset actress was abruptly interrupted in her DMs when she received the photos without her consent, which was an image of a penis. But rather than engaging in a verbal back and forth, she decided to do something much more embarrassing.

Chrishell made the decision to send the photos to the perpetrator’s mother before posting about it on her social media. In a post to her fans on Instagram, Chrishell said: “I don’t love opening DM’s to unsolicited [eggplant emoji] pics (NO ONE DOES).

“So I sent it to a guys mom today. He had just tagged her for International Women’s Day soooooo please don’t send those to me guys.” While this was clearly embarrassing for the culprit, Chrishell saved his blushes for the following reasons.

First of all, she did not send his mother the actual photo. Instead, she used an emoji in order to express what had happened. Secondly, she did not reveal the name of the person that was responsible. As such, the person has a chance to redeem himself. Lastly, Chrishell made it clear that she has no intention of sharing the real photos.

And yet, she did have a laugh about it though. She stated: “The girl you don’t want saying hi to your mom in the dm’s.” The response on social media was one of ridicule. A significant majority of people felt that the man deserved everything he got and this was a lesson for anybody else trying to do a similar thing.

One person wrote: “Brilliant. Also a lesson to all men that you can’t just make a few comments online to make you look good you have to live those values everyday.”

Chrishell has shown that she does not take any prisoners. And based on everything she has done so far, she is not going to change her position anytime soon. So there you have it folks. What did you think about this story? And what would you have done in Chrishell’s position?