Skip to content
Home > TV > The Bachelorette > ‘The Bachelorette’: Michelle Young And Nayte Olukoya Were Love Up This Christmas-‘Santa Brought My Christmas Present A Little Early’ 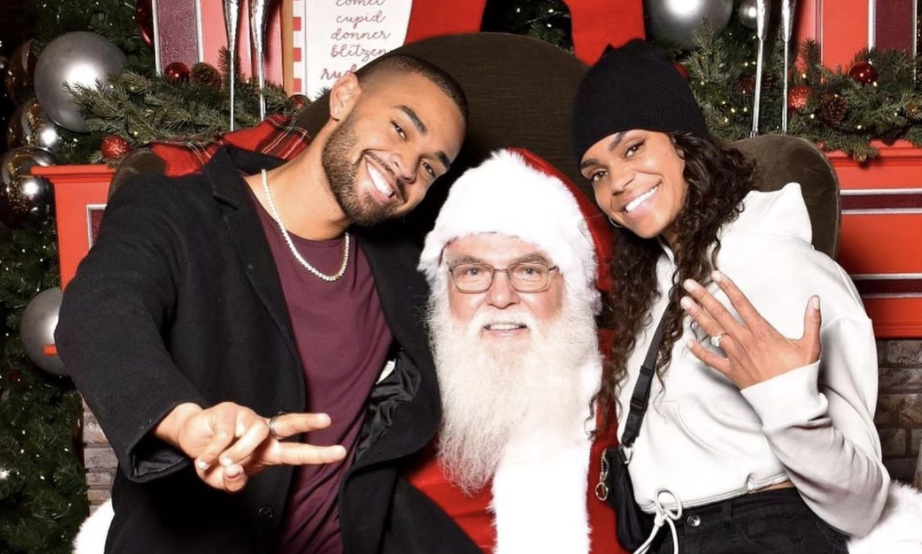 ‘Bachelorette’ lead Michelle Young had a Christmas to remember as she celebrated with her newly crowned fiancé Nayte Olukoya.

‘The Bachelorette’: Michelle Young And Nayte Olukoya Were Love Up This Christmas-‘Santa Brought My Christmas Present A Little Early’

Michelle and Nayte concluded the 18th season of ‘The Bachelorette’ by walking away together as a couple. And the timing of the show could not have been any better in that regard since it coincided with the start of the Christmas holidays.

And in keeping with the festivities, the couple wanted to make sure that their fans knew exactly what went down on their first time together during the Christmas season.

In a post to her fans on Instagram, Michelle shared a picture of herself and Nayte sitting on Santa’s lap. They both have huge smiles on their faces and could not be any happier.

The post was captioned by the following comments: “Santa brought my Christmas present a little early this year. Although he may be regretting it after Nayte REQUESTED to sit on his lap. Merry Christmas Y’all!”

Much in the same way, Nayte was also excited to be spending time with Michelle. But rather than this being her idea, it looks as though Nayte was the one that wanted to bring Santa in on the act. And by the sounds of it, he had to do some persuading.

After all, it is no secret that this is often synonymous with children. In a post on his Instagram, he remarked: “Believe it or not, but I had to drag Michelle’s cute butt to go take a picture with Santa. Merry Christmas everyone!!!”

Regardless of how one spends Christmas, the most important thing was that the pair managed to spend some quality time together. And that was reflected in the comments that followed.

Large numbers of their fans came out in droves to express their happiness at the fact that things seem to be going very well. One fan wrote: “I love Nayte because he is AUTHENTICALLY Nayte.

“#teamnayte all the way. I was so impressed the way you stood up for yourself Nayte . More power to you and love to you and Michelle.”

It is great to see them being so happy and long may that continue. If you liked reading this article, then check out our other features on the Daily Soap Dish.