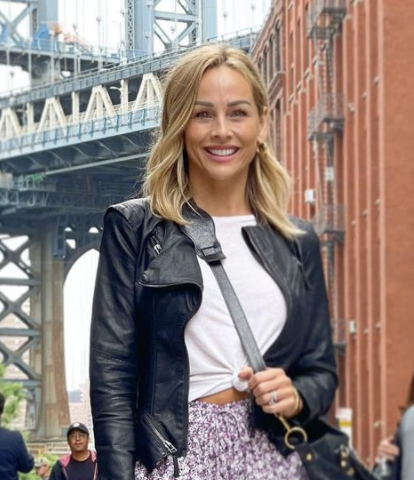 Clare Crawley has remained defiant in the face of huge struggles amid the constant speculation that she has broken up with Dale Moss.

The pair have reportedly split for the second time after they had initially reconciled to the point where they had apparently been engaged despite the absence of an official announcement.

But now it seems that things are over for good, and it has not been helped by Clare’s other problems. Her mother is suffering from Alzheimers which has added an extra strain on Clare, as she is having to watch her mother deteriorate without being able to do anything.

And now it has gotten to a point where Clare is nearly at rock bottom. In a post to her fans on Instagram, Clare shared a picture of herself walking her dog down the street.

The post was captioned by the following comments: “It takes a lot to bring me to my knees. But damn, this week has pushed me to that point.” Having said all that, she has refused to go into a moment of deep despair.

She admitted that she must stay strong for her mother, as well as for herself, given that she has just recently undergone some surgery on her breasts which was followed by an allergic reaction.

She added: “One thing I refuse to do, though, is stay down. I’ll be dammed if I let it all take me out, so amidst all this, I’m taking steps even if [they] are small.”

And in an attempt to do just that, she is staying close to her family that has been there for her. In particular, her sister, to whom she is very close with. And the additional support of her fans has also helped her in trying to stay positive.

Her following comments confirmed as much: “I want you to know the messages of support + love from my Insta fam haven’t gone unnoticed.”

It is wonderful to see Clare staying so strong through her troubles. Let us hope that she can overcome these issues and get back to her usual self in no time.