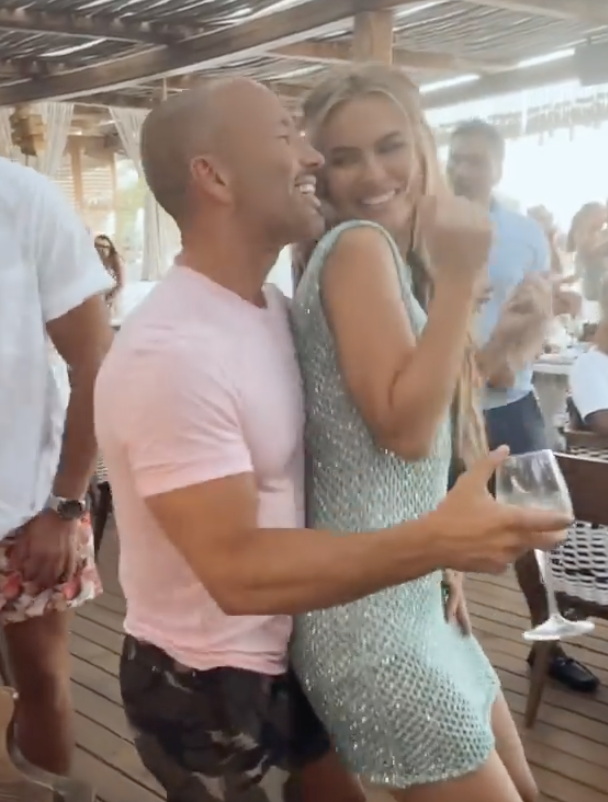 Chrishell Stause has been responding to the comments that have been going around on social media in response to her relationship with Jason Oppenheim.

The couple recently were pictured kissing each other passionately whilst they were enjoying their vacation in Italy. The romance has gotten people’s attention, particularly given that Jason is the boss of Chrishell for the real estate company that she works for. While that may have been considered to be awkward for a subset of the fans, Chrishell has found it anything but that.

In fact, she enjoyed teasing the fans in response to their opinions. In a post to her fans on Instagram, she shared a video of Jason doing some press-ups near the pool. Chrishell, for her part, was on top of him as he completed as many repetitions as possible. They were clearly having a good time. The post was captioned by the following comments: “Being tough on the Boss.”

The video evoked a huge response from the fans. One fan wrote: “You are 100 percent getting with him,” to which Chrishell replied: “A real Sherlock Holmes here.” Nevertheless, not everyone was as cheerful as this fan. Some questioned whether it was ethical for Chirshell to be in a relationship with her boss, given that she did meet him after he had established his company.

Naturally, she would be treated more favourably than other employees. Although there is nothing untoward with that, fans hinted that the dynamic might be uncomfortable. Another user remarked: “That’s just weird with your boss,” with Chrishell responding: “Who’s gonna tell her … ?”

Despite the negativity surrounding their relationship, the pair could not be any happier. And so it showed, as even Jason was unconcerned about the disparaging comments that were being made.

In a prior interview with Us Weekly, he said: “Chrishell and I became close friends, and it has developed into an amazing relationship. I care about her deeply, and we’re very happy together.” The duo are doing great in their lives. If they can survive the haters that are coming their way, then the sky is limit for their relationship.