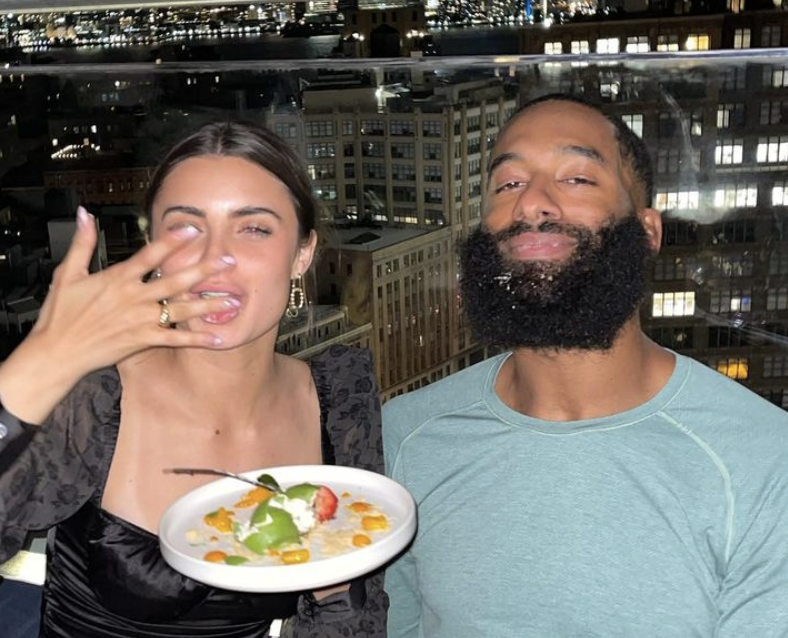 Matt James and Rachael Kirkconnell were enjoying some quality time together during their vacation at Aspen Mountain and Aspen Snowmass Ski Resort.

The stars of The Bachelor franchise put their recent troubles behind them with the news that they were back as an item. While the public has had a mixed reaction to this, the pair have continued to move on with their lives. And the vacation was a chance for them to finally celebrate their own happiness.

A source told Us Weekly: “Rachael was excited to experience Aspen for the first time. They toured the gardens and pool courtyard at the hotel, sipped champagne and celebrated with a toast.” By the look of the pictures, they certainly made the most of their time.

In the picture here, we can see Matt and Rachael enjoying a glass of wine together as they sit on some chairs next to each other. Matt has his hand on Rachael’s thigh, and both have huge smiles on their faces without a care in the world.

A witness confirmed just how happy they were feeling: “[They] leaned in affectionately. This was only a glimpse of the affection they’ve been giving each other the entire time. And they certainly weren’t hiding it.” Naturally, this has led fans to question whether the pair will be getting engaged anytime soon. Although it is not out of the realms of possibility, any such decision cannot be taken lightly.

By getting engaged, Matt would be signalling to the world that he has forgiven Rachael’s prior racist social media posts. This would be a big step to take, given that there are still many who resent Rachael over her prior conduct. And yet, insiders believe an engagement could happen.

An insider said: “[Their] Aspen getaway was very romantic. Both were bright-eyed, easygoing and in a very joyous mood. It’s very obvious to onlookers that they are definitely headed in the direction of an engagement.”

Time will tell how it all plays out, but Matt and Rachael have given themselves every opportunity to make things work. And if things continues in the same vein, then it is only a matter of time before we hear an engagement proposal.