‘The Young And The Restless’ (Y&R) spoilers show that next week will feature a special stand-alone episode between Victor Newman (Eric Braeden) and Adam Newman (Mark Grossman)! The episode will center around a fantasy of Adam as he sits across from his father in a game of chess.

However, the pieces of this chess game all symbolize people in Adam’s life that he has used and made “pawns” of. It will be a surreal experience for Adam as he comes to understand how he’s treated people, what he could have done differently, and how he can change going forward, all aided by his father across from him. 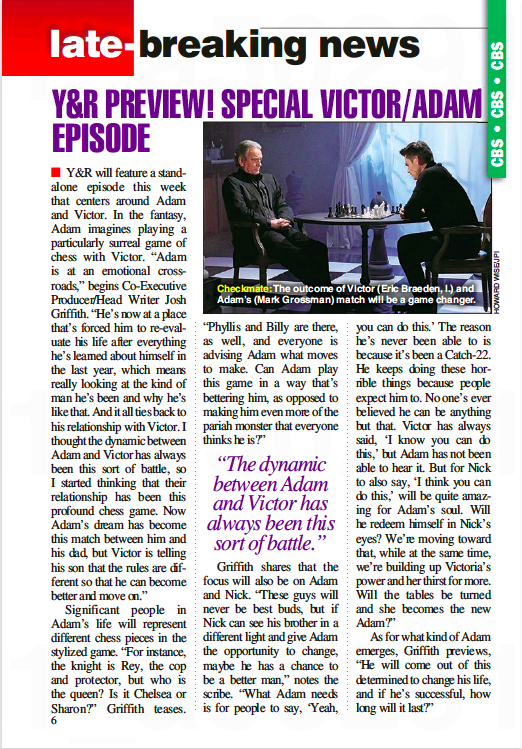 Is this “fantasy” a life or death situation in Adam’s mind during the surgery for Faith Newman (Reylynn Caster)? Or is he simply having a battle of angels and demons as fights through his own mind of becoming a better man and being accepted by his family?

“Adam is at an emotional cross-roads. He’s now at a place that’s forced him to re-evaluate his life after everything he’s learned about himself in the last year, which means really looking at the kind of man he’s been and why he’s like that. And it all ties back to his relationship with Victor. I thought the dynamic between Adam and Victor has alwasy been this osrt of battle, so I started thinking that their relationship has been this prodound chess game. Now Adam’s dream has become this match between him and his dad, but Victor is telling his son that the rules are different so that he can become better and move on.”

This looks like it will definitely be an emotional ride and we look forward to seeing what comes next week!

What do you think? Do you think Adam will make it through the operation okay? Let us know in the comments below.