Skip to content
Home > TV > Keeping Up With The Kardashians > KUWTK: Scott Disick Broke Up With Sofia Richie Because His Baby Mama Always Comes First

‘Keeping Up With The Kardashians’ spoilers find that while they certainly had a very turbulent past, Scott Disick has made it clear that his baby mama always comes first, no matter what.

In fact, the reality television star recently admitted that he broke things up with his ex Sofia Richie simply because she made him choose between her and Kourtney Kardashian, which is something he wasn’t about to do. Here’s what you need to know.

While on Keeping Up With The Kardashians, Scott opened up about the reason why he and Sofia broke up and apparently it all had to do with his ex, Kourtney Kardashian. The two share three children together: Mason, 11, Penelope, 8, and Reign, 6.

‘Keeping Up With The Kardashians’ Spoilers: Scott Disick Broke Up With Sofia Richie Because His Baby Mama Always Comes First

‘Keeping Up With The Kardashians’ Spoilers: Scott Disick Broke Up With Sofia Richie Because His Baby Mama Always Comes First.

“I thought I would give it a try and make her more of a priority, but then even when doing that, I feel like she just started wanting to push Kourtney out. And I said like, that’s the most important thing to me is my kids and that’s my family, and the only family I have, including you guys along with it… She was like, “I don’t want to share you as a boyfriend with Kourtney.” And then she literally said with an ultimatum: “You have to choose me or Kourtney.”

Scott then made it clear that he would never turn his back on the mother of his children.

“I’m never going to give up my relationship with Kourtney and the co-parenting we have, nothing in a million years, will be worth what we have. And I truthfully believe if the right person were to even come along into Kourtney’s life, or my life, us having children and having this amazing relationship would only be a plus to the outsider.”

Meanwhile, it looks like Scott’s current squeeze, Amelia Hamlin, is getting to know his kids. According to ET Online, the Keeping Up With The Kardashians star and Lisa Rinna’s daughter were spotted at the Sugar Factory in Miami with Scott’s three kids late last month.

Scott, who is now rocking a pink hair ‘do, was spotted with Amelia and his kids as they all sat together with a few friends to dine on some of the restaurant’s sweet treats, says one eyewitness.

With that said, one source close to the situation says that even though Scott and Amelia are certainly spending a lot of time with one another and are also being papped with each other, they aren’t taking their relationship that serious yet.

“Scott and Amelia are having a blast together. They’ve been going out with friends, spending time together and overall just having a really good time,” the source said. “They’re still not super serious and are just taking things day by day and keeping things light and fun.” 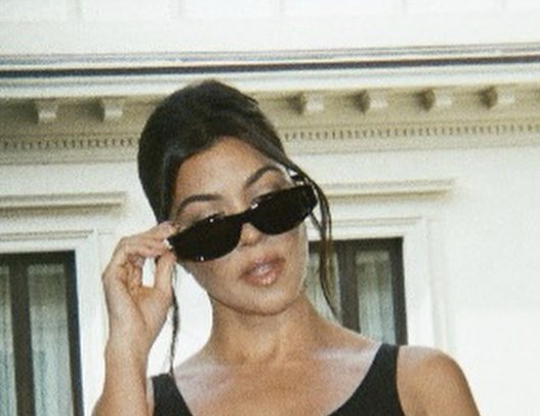