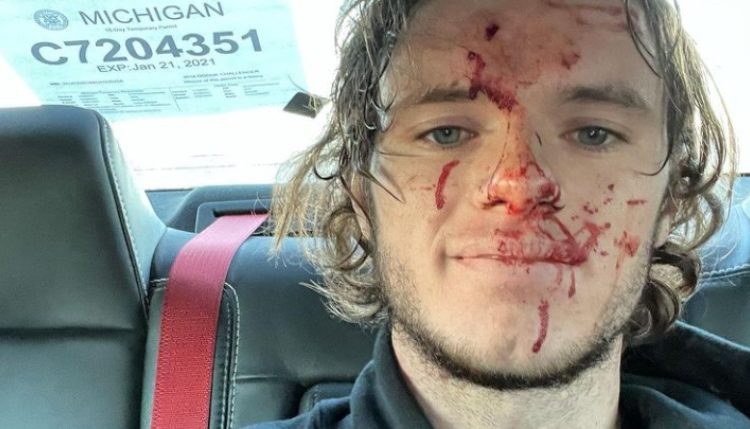 YouTuber WhistlinDiesel caught a stroke of luck recently when he accidentally shot himself in the head. The vlogger has over 1.75 million subscribers, was shooting at metal players with a .50 caliber gun from only four feet away. You’re probably already saying this isn’t going to end well, and you’re right.

One of the bullets ricocheted and found it’s way into his forehead. The YouTuber told his fans about the incident on Thursday with a photo of his face covered in blood from the ricochet. See his caption below and use the link to view the photo.

“You look at life a little differently when you pull the trigger of your .50 cal and your head shakes and 🩸 starts dripping down past your eyes. I put my hand up and just felt metal sticking out and about passed out. Got a ct scan to be safe and they say my skull isn’t cracked soo…. back to target practicing!!! 😀 For anyone wondering I was shooting steel plates from 4ft away like a boss to see how many it would go through. It went through 2……”

Viewers of his commented on the incident, “Glad you’re ok, but kinda stupid thing to be doing for internet views. Respect the 50 man, I’d still like to see the finished monster max 2.” and “What did the impact feel like?”

Meanwhile, others called him out for such a foolish mistake, “So what you’re saying is you know nothing about firearms and shooting steel and the safety precautions involved with both. Then you get injured and use these dramatic events you caused as Instagram bait to get followers. Well played, you should start an only fans account.” and “That’s cause you think it would be cool to do stuff like this in a non safe manner. This could have easily taken your life. Then what’s left? Nothing for you. A family that is grieving cause their son, cousin, nephew thought he was going to be a bad ass and shot a piece of steel from 4 feet with a 50 cal! You know what those things can do at 2,000 yards! You’re lucky nothing worse happened to you. Putting a truck in the ocean funny. Shooting steel plates at 4 feet with a .50cal. Not funny. Just stupid.”

What do you think? Can you believe this? Let us know in the comments below.