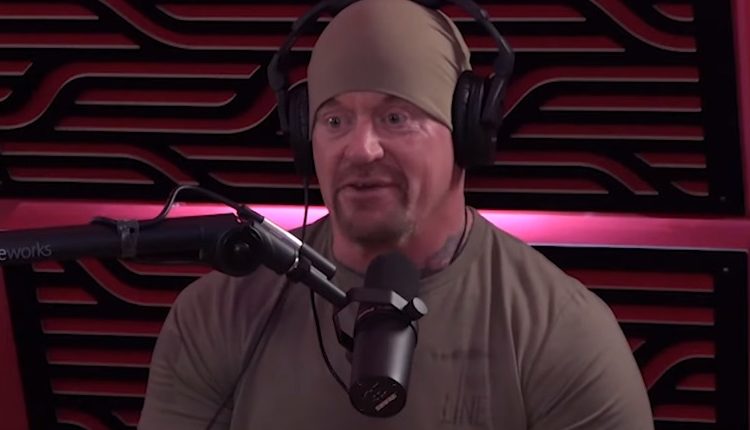 Mark ‘The Undertaker’ Calaway has been a staple of wrestling for 30 years and is/will go down as a WWE legend. The Undertaker was a larger than life character that could strike fear into other wrestlers and fans with the sound of a bell. His legendary entrances and show appeal made him stay relevant for decades, now, however, he’s hung up the trenchcoat.

In his recent interview on The Joe Rogan Experience, he spoke about his decision to retire and how much the last 30 years have meant to him. You could hear the passion in his voice and he told some very exciting stories throughout the entire interview. In the clip below, you can hear 8 minutes of him talking about his final match and walking away from the WWE.

It’s odd seeing a theatrical character like The Undertaker as a normal guy sitting across the table from you. He’s looking to the future now and is wondering where he will go now. It was mentioned that he may start mentoring some up and coming wrestlers and still being around the sport as he’s devoted his life to it, but he’s not entirely sure what to focus on now.

“I have to find out what I’m passionate about,” Calaway said. I look forward to seeing what he does from this point on. I was a big fan of WWF in the 90s’ as a kid and seeing everyone like Dwayne ‘The Rock’ Johnson, Steve “Stone Cold” Austin, and Glenn “Kane” Jacobs go one to be incredibly successful in other endeavors gives me a lot of hope for Calaway.

What do you think? Were you a fan of The Undertaker? Let us know in the comments below.

Dwayne ‘The Rock’ Johnson Has Partnered With Acorns, The Leading…

Joe Rogan Gets Freaked Out After Watching ‘Greenland’ Starring Gerard…

Dwayne ‘The Rock’ Johnson’s ‘Young Rock’ Is The Biggest…