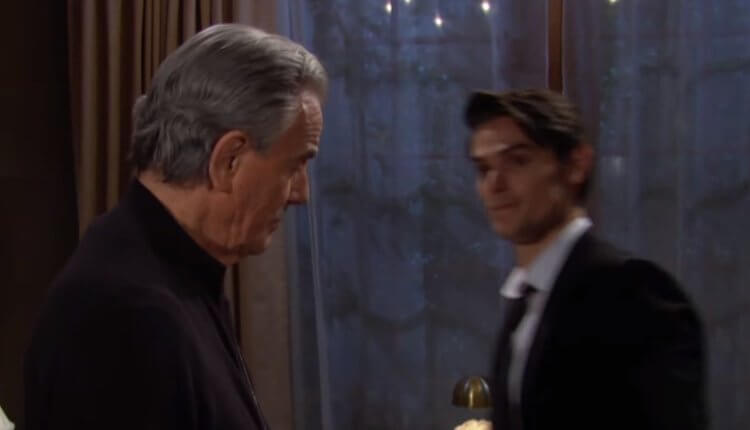 ‘The Young and the Restless’ Spoilers: Victor’s Shocking Transformation, Turns Into The Father Adam Has Never Had

‘The Young and the Restless’ (Y&R) spoilers indicate that there’s a very good chance that Adam Newman (Mark Grossman) might finally get what he’s been looking for in Victor Newman (Eric Braeden) this entire time, and that’s a father that he can lean on. Read on for all of the latest spoilers.

In the latest issue of Soap Opera Digest, co-Executive Producer and Head Writer Josh Griffith teased what’s to come for The Newman family and particularly for Victor and Adam.

‘The Young and the Restless’ Spoilers: Victor Turns Into The Father Adam Has Never Had

He said, “Victor will step in to help Adam as his world spins out of control thanks to Chelsea’s health crisis. Victor’s support of Adam will cause serious conflict among the Newmans. Complicating matters will be Adam’s bond with Sharon, which won’t sit well with Rey. Nikki will take matters into her own hands to help Faith when she learns of her [granddaughter’s] drinking. This is very personal for Nikki, who will stop at nothing to make sure history does not repeat itself with Faith.”

Now, as far as his other son Nick Newman (Joshua Morrow) is concerned, along with his on-again, off-again relationship with Phyllis Summers (Michelle Stafford), Griffith offered, “Phyllis will finally get the upper hand against Victoria. However, Phyllis’s plan will only succeed if she can convince Kevin to give her the goods against Victoria. Meanwhile, the rift between Nick and Victoria will grow when Nick calls out Victoria for her behavior toward Phyllis.”

Of course, fans will have to tune in to find out what will happen next! ‘Young and the Restless’ airs weekdays on the CBS network. Check your local listings for times. In the meantime, drop us a line with your thoughts about this in our comments section below.

Also, come back right here for all the latest news and updates on your favorite royals and celebrities along with spoilers from The Young and the Restless, The Bold and the Beautiful, General Hospital and Days of Our Lives. Don’t forget to visit TVRocker for all of the latest exciting news on all of your favorite daytime television soaps.

‘The Young and the Restless’ Spoilers: Summer Newman And Sally Spectra’s Rivalry Heats Up In Nasty Way