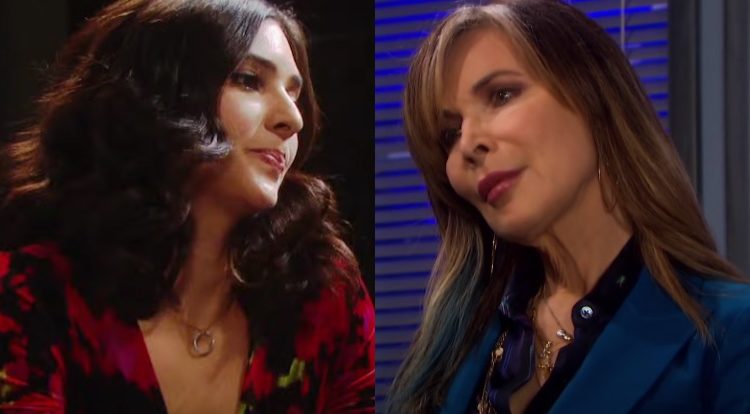 NBC ‘Days of Our Lives’ Spoilers: Kate vs. Gabi DiMera Rivalry Heats Up!

‘Days of Our Lives’ (DOOL) spoilers reveal Jake Lambert (Brandon Barash) hasn’t had a problem finding a woman—even if he’s pretty unlucky with most. Look at Gwen Rizczech (Emily O’Brien). She started off hiding out from him (supposedly) in a mental hospital to trying to worm her way back into his life.

Plus, she seemed more about the DiMera fortune than him after a while. But she’s not the only woman in his life, or the only headache there. Let’s take a look at the two women vying for Jake and who we think should win.

First, ‘Days of Our Lives’ spoilers indicate Gabi DiMera (Camila Banus) was almost obsessed from the moment she first saw him. Mostly, because she thought he was the late Stefan DiMera (Barash).

We actually felt for her when they learned the truth about Jake. He’s not Stefan with memory loss after being saved, like so many others in Salem. He’s actually Jake’s twin. The pain was clear, as was Jake’s empathy. We think their mutual emotions were part of what led them to be together.

Of course, when she and Rafe Hernandez (Galen Gering) had to flee a threat to their family, she had to break things off. Since she had no idea what the future would bring, she made it as final as possible. However, now that things are settled, she decided to return for a second time.

This time, to mark Rafe’s birthday. However, she learned about Jake’s new job as CEO of DiMera and immediately came running. She proposed a return of Gabi Chic as well as a more personal reunion between her and Jake. There’s just one obstacle.

Namely, Kate. ‘Days of Our Lives’ spoilers reveal she and Jake started a secret romance after Gabi left. They’ve recently been forced into going public and Kate had to face some accusations about being ashamed of Jake.

Eventually, she decided to be true to her feelings, regardless of the difference between them. Recently, she and Gabi faced off over Jake in the DiMera offices. Gabi swore she’d win him back. So who are we rooting for?

NBC ‘Days of Our Lives’ Spoilers: Our choice

So, we’ll admit we love Gabi. Plus, Banus and Barash have great chemistry that made Stefan’s sudden demise hard for Stabi fans to handle. But we’re going to have to give Kate the edge here.

As much as we do like Gabi, we think it was a bit much for her to waltz in the office practically assured he would jump at her double proposal. We think her decision to pretend he was just a toy, no matter how well-intentioned, was too hurtful. It’s hard to see him just getting beyond that.

Meanwhile, Kate has really shown a new side to herself with Jake. We think there’s a genuine connection between them, and their scenes are entertaining to watch. With the two of them united as a couple and at work, we think they’ll be a force in town.

And they could bring some great new energy to DiMera. Even if Kate’s role will likely be minimal, as she’s also busy with Abe Carver (James Reynolds) and his PR.

‘Young And The Restless’ Spoilers: Victoria Newman (Amelia Heinle) Pissed That Lily Winters (Christel Khalil) Is Playing With Her Daughter – Will She Make It To Her Vacation?