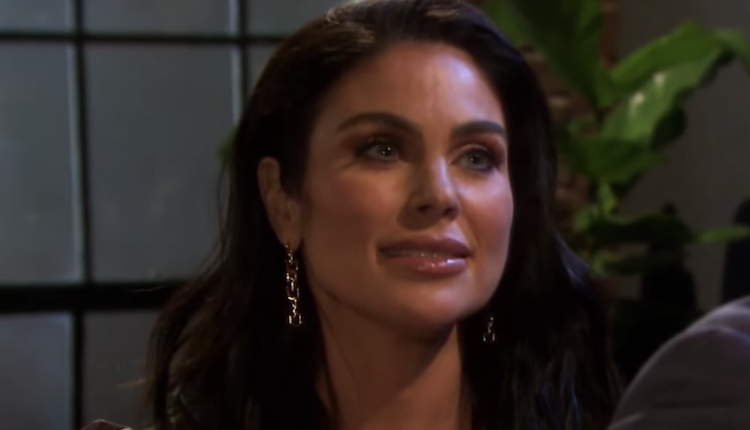 Nothing like the possible end to a storyline to start a new week, and NBC ‘Days of Our Lives’ (DOOL) spoilers aren’t sure how we should feel about that.

On the plus side, it gives us something big to look forward to on Monday, and that makes sense. Especially given the various other storylines this could open up.

Chloe Lane (Nadia Bjorlin) is one of those types that won’t hesitate to help someone she cares about, and occasionally those she hates.

It’s because of that hear that she went against Philip Kiriakis (Jay Kenneth Johnson)’s wishes and told Brady Black (Eric Martsolf) that Philip needs his help.

While Brady looked like he thought Chloe was on drugs, it appears that she’s going to confess everything she knows about Philip’s problems to him in the hope that he’ll help.

‘Days of Our Lives’ is really looking forward to this scene as Brady’s been awesome the last few weeks with his looks and one liners.

It’s great to see him not super serious all the time, and that playfulness will be on full display when he’ll banter with Philip why he should help and not tell Victor Kiriakis (John Aniston).

Brady and Philip will agree that they don’t want Brady involved, but Chloe could persuade Brady to take the plunge. Will he be able to resist her wiles?

NBC ‘Days of Our Lives’ Spoilers For January 11: Charlie’s in the crosshairs

It took some time and a lot of patience on Tripp Dalton (Lucas Adams)’s part, but it appears his name will be closer to being cleared when Rafe Hernandez (Galen Gering) officially accuses Charlie Dale (Mike Manning) of Allie Horton (Lindsay Arnold)’s rape.

We expect this to be the beginning of a long line of untangling misconceptions, not the least is wondering how Kayla Brady (Mary Beth Evans) thought a quick answer was appropriate.

With Charlie under arrest, Allie will finally have her chance to confront her attacker and we expect this to be a powerfully emotional scene.

All of Allie’s rage, pain, and frustration will come out toward the person that deserves it, and hopefully those in attendance will make sure all sharp, blunt, and projectile weapons are removed from the room.

Not that she doesn’t deserve to take it out on him, just that it’d cause her more harm than good.

We expect she’ll also realize how she treated Tripp, and we could see a possible relationship between them develop at some point out of these ashes.

Will Allie finally get her justice? Let us know in the comments below and check back with ‘Days of Our Lives’ for the latest updates, spoilers, and speculation around. Don’t forget to visit TVRocker for all of the latest exciting news on all of your favorite daytime television soaps.

‘Keeping Up With The Kardashian’: Kim Kardashian Is Dumping Kanye West For Her Own Sanity

CBS ‘The Young and the Restless’ Spoilers: Nikki Worries about Nick and Victoria; Phyllis Encourages Kevin Towards his Dark Side