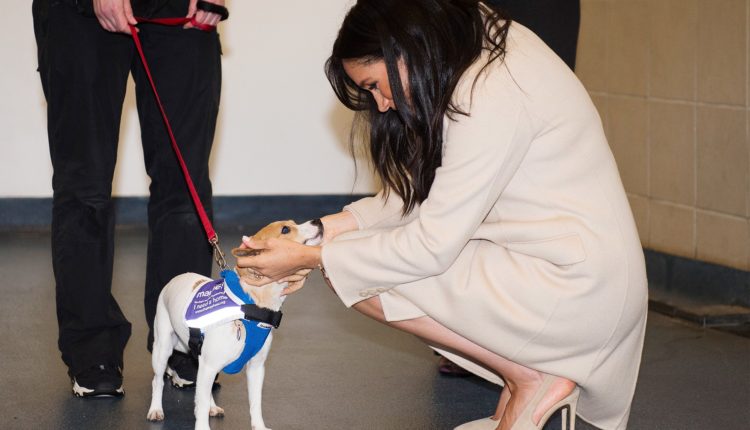 Meghan Markle has been praised for the role that her rescue dogs have played during the pandemic. Caroline Yates, who happens to be the CEO of the animal shelter Mayhew, has come out in glowing praise of Meghan.

When speaking to Hello Magazine, she said: ‘Whenever we talk to the Duchess about the charity, she always references how important her dogs are and what a support they are. Particularly during everything that’s happened this year, with COVID, and with the personal trials and tribulations, she went through this year.

“It was really nice to share our experiences with her about how important animals are when things are tough and what a comfort they can be.” The two have quite a close relationship after Meghan sent the charity a special Christmas card. And despite the bond, Caroline was shocked to receive such a token.

She said: ‘We had no idea what it would look like before we got the photo, and when we saw it, we thought, “Oh wow!” It’s very family-oriented. It was really lovely.” This closeness has continued even though Meghan is no longer in the UK. The gesture and honesty has touched Caroline in more ways than one.

When speaking on this, Sarah Hastelow told Newsweek the following: “She’s been such a champion of animals and animal welfare. It’s always been a passion of hers.” And further sources revealed the same: “The Duchess is in touch and working with Mayhew at this time. [The charity is] ‘more than a classic animal charity’ and it is ‘supporting so many other people in the community.

“We desperately need extra funds to buy supplies of food, litter, flea and worm treatment as our suppliers are running low.” The love for animals is more than just for charity. She has always been a fan, which was noticeable when she had to leave her dog Bogart in Canada to relocate to the UK. Sources at the time said: “Meghan adored that dog, but the decision not to take him back was based on Bogart’s relationship with Harry.”

However, the dog was not a fan of Prince Harry. Another source said at the time: “[It] never took to Harry’ [and] didn’t like him. Of course, her staff in the UK who knew about her decision found her statement quite strange, but they accepted it at face value because Meghan knows her dogs.”

It is good to see Meghan getting some positive media coverage. If you enjoyed reading this article, then check out our other features on the Daily Soap Dish. Please also visit TVRocker for all of the latest exciting news on all of your favourite daytime television soaps.