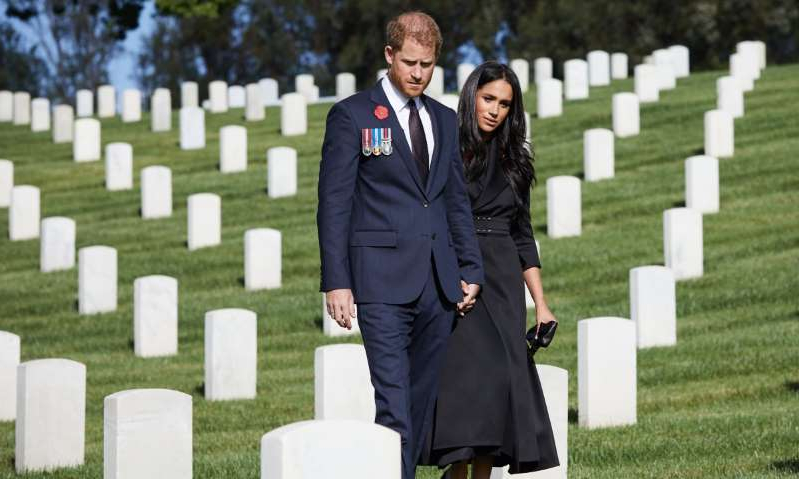 British Royal Family News find that Prince Harry and Meghan Markle are learning the hard way that it’s tough being British Royals in America. That’s because the Duke and Duchess of Sussex got slammed in each and every direction after they spent their Sunday afternoon “personally recognizing” Remembrance Day with a cemetery photoshoot in Los Angeles.

This comes after sources say that Harry was “deeply saddened” when his request to have a wreath laid on his behalf at London’s Cenotaph was refused by Buckingham Palace. Here’s what you need to know.

According to the Daily Mail, Harry and Meghan were pictures at Los Angeles National cemetery for Remembrance Sunday. The Duke left a wreath and a message that said, “To all of those who have served, and are serving. Thank you.”

And while the gesture was considered very noble, a lot of people say that the entire ordeal looked very embarrassing. In previous years Harry had marked the day with visits to Cenotaph.

Of course, it didn’t take very long for Prince Harry and Meghan Markle’s critics and detractors to weigh in on what many people are calling a “staged photo op.” Clearly, critics on both sides of the pond are not impressed.

Many comments included, “I really don’t know what Harry expected. The RF is not a family you can just drop in on and attend ceremonies that are meaningful to you and then go back to your American life,” along with, “Ohhhh how low can you go for an upstage photo opp? Wow. This scrapes like the underneath of the bottom of the barrel. This scrapes gravel.”

Another royal critic put it this way, “This is embarrassing. Cemetery photo shoot! Dear God, can they not do anything in private without having a camera crew with them and then send out to the main stream media?”

So far both Prince Harry and Meghan Markle have not responded to any of the comments, although it is doubtful that they will. However, many have pointed out that it would make more sense for the Duke and Duchess to honor British veterans and citizens with royal engagements and public appearances back in the U.K., and not in Los Angeles. Do you agree?