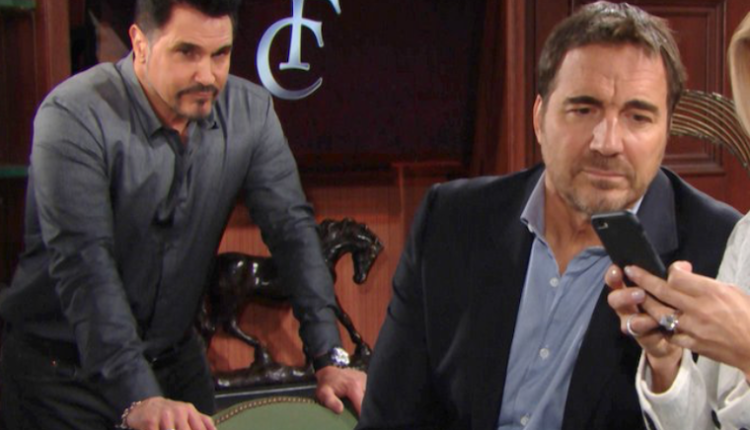 CBS ‘The Bold And The Beautiful’ Spoilers: Will social distancing prevent Bill and Ridge from throwing down?

CBS ‘The Bold And The Beautiful’ (B&B) spoilers finds that Bill Spencer (Don Diamont) and Ridge Forrester (Thorsten Kaye) have not hesitated to throw hands over issues they’ve had in the past.

One of the most iconic scenes you can find on youtube is when Bill had Ridge bent over a desk trying to throttle him. However, now in the days of social distancing, we have to wonder, how on earth is this going to affect fight scenes between characters?

CBS ‘The Bold And The Beautiful’ Spoilers: Will social distancing prevent Bill and Ridge from throwing down?

I mean, Bill just did the most horrible thing that he could possible do and mowed down Ridge’s daughter with his car while she was on her motorcycle. That is going to warrant some major tension between those two, not that there wasn’t already tension because hey Bill also kissed Brooke Forrester (Katherine Kelly Lang) a few months back which has almost caused his marriage to Katie Spencer (Heather Tom) to END, but that’s neither here nor there right now and everybody seems to have forgotten all about that little kerfuffle.

I mean, there’s been years of animosity brewing between the two and you know, you just know that both of them have been waiting on the right time to unleash on each other and the the bell for round one has already sounded, ding ding!

But nope, no fight in the hospital, no chair-throwing, none of Bill acting like a pro wrestler (come on, you know it’d be hilarious!) and no Ridge getting his butt kicked and whining his way all the way back to Bro–I mean, Shauna. Yeah, Shauna Fulton (Denise Richards), that’s who he’s supposed to be with now, right? Forgive me, quarantine makes one forget a few pertinent details.

But seriously, when it comes down to kicking ass and taking names, how are they actually going to do it? I mean, the fight’s going to look a bit ludicrous (although very socially responsible!) with surgical masks on. So let’s think of a few ways that Bill and Ridge could fight without actually exchanging blows: Karaoke Battle: I vote classic rock but there could always be some showtunes, country, and top 40 involved as well.

Dance Off: Come on, let’s see these two ‘serve’ each other properly! In the same vein as ‘You got served’ and ‘Honey’ and all those early 00’s dance movies, let’s see just how well these grown men can get down! First one to break a hip loses!

Rap Battle: HAMILTON STYLE! We could even bring in guest stars to help these guys do it! I mean, come on, the Ten Duel Commandments say that you need a second anyway, right?

Broadway Musical style battle: Maybe the first three aren’t really targeted at guys who are Ridge and Bill’s age, but they come from the generation where West Side Story was pretty popular so, how about a battle to rival that of the Jets and the Sharks? Might work!

Twitter Fight: Hey if it’s good enough for our dear leader, why isn’t it good enough for The Dressmaker and Dollar Bill Spencer, eh? He could put him on social media blast and have him virtually cancelled and then Ridge could hit back! They could get their sons in on the battle too, it could be a family affair!

Video game battle: I know that some of you need to see the action and want to have front row seats to the well-deserved Fatherly ass-kicking that Ridge is going to receive, and fans, as well you should. That is why I’m proposing that Bill and Ridge play one of those TKO fighting games (could be anything, even OG Streetfighter!) and pummel each other’s avatars to their hearts content.

It would satisfy the need to see someone get throttled but would also be socially responsible enough not to risk anyone’s actual immune system. Again, it could be a family affair! Their sons could set them up with gaming accounts!  Hey, just a few ideas. We’ll see how social distance fighting is handled. Stay tuned!!!g

CBS ‘The Young and the Restless’ Spoilers: Camryn Grimes Tweets Her YR Death

Has the Ellen DeGeneres Show Been ‘Canceled’?