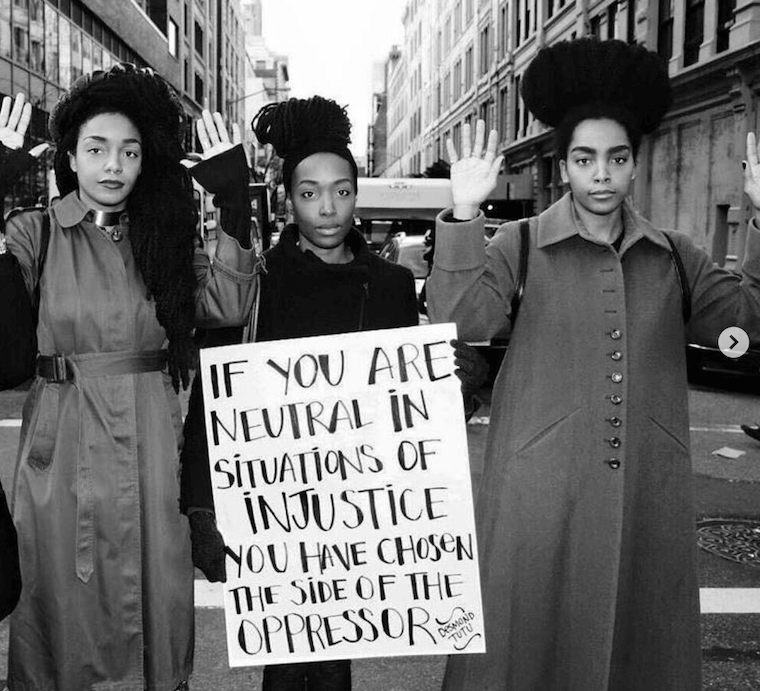 At first we were all proud of Madison Beer, using her platform on instagram to take photos of being right in the middle of the protests and doing all of this stuff for the Black Lives Matter movement, but now it looks like we have to question those intentions because her claims of being “in the thick of it” may not be so real after all. Recently she posted a photo of her standing on top of a car, protesting with two giant signs and it looks like, from the camera angle that she is right in the thick of it in downtown LA, protesting with the best of them. However… the key words here are camera angle, because Madison is nowhere near a protest at all.

Someone actually posted a video of how the photo was taken and honestly, it looked really, really staged. She was actually way behind the demonstration, standing on a car, blocking traffic. You can imagine how these drivers felt that were waiting in behind her to pass. Another thing is, they initially thought it was a photo taken by paparazzi but it is well known that it’s extremely hard for the paps to spot a celebrity during a protest simply because there are so many people around, it’s not a star-studded event and there are also cops everywhere. So in order for the paparazzi to know exactly where Madison was, she would have had to call them herself. Ahem, however some more evidence has come to light that hopefully proves that that is not true.

Madison says that the photo was not staged, and she has been at the actual protests. Now this is true, she has posted other photos of herself in the thick of it, and even got tear-gassed at one point. The photographer that took the photos has also come out and commented that the photos in question were not staged and that in fact the had ran into Madison on all three days of the BLM event, he says that the photo was taken on the final day of the event and that he just so happened to bring his camera. However in his DM’s he tells a bit of a different story, when questioned he asks the person who DM’d him, “Why does it matter if a person hired a photographer or not, you’re focusing on the wrong things.” I mean, point but at the same time, when you’re at a protest you should be there for the cause… not for the views. We’ll keep ahead of this story at DSD, stay tuned!