NBC ‘Days of Our Lives’ (DOOL) spoilers update indicate that it looks like the old feud between Nicole Walker (Arianne Zucker) and Kristen DiMera (Stacey Haiduk) is still alive and kicking! Nicole does not buy for one second that Brady Black (Eric Martsolf) stabbed Victor Kiriakis (John Aniston), not one bit. In fact, she will go so far as to say that this stabbing has Kristen’s name written all over it. She thinks it’s wrong for Kristen to let Brady take the rap for something that he didn’t do. But Brady is just trying to make sure that little Rachel Isabella Black has a Mommy to come home to once she is located along with Sarah Horton (Linsey Godfrey). But Nicole still thinks it’s wrong because she thinks that this way Brady will be robbed of his daughter.

NBC ‘Days of Our Lives’ Spoilers for April 30: Kristen wants to confess but Brady stops her

It would seem that Nicole’s tirade gets to Kristen, she makes her feel guilty by saying that Rachel wouldn’t be raised properly without Brady around anyway When she visits Brady in jail later she will tell him that she is the one that’s going to come clean and clear all this mess up, but Brady is going to advise against it and proceeds to give her all the reasons why this would be a bad idea. Geeze Brady, you’d think you actually liked it in prison or something. I mean, if you’re really into it I’m sure Will Horton (Chandler Massey) and Ben Weston (Robert Scott Wilson) can give you a few pointers but that’s just a theory of mine, I digress.

NBC ‘Days of Our Lives’ Spoilers for April 30: Victor wakes up! Uh-oh Kristen…

Poor Ciara Brady (Victoria Konefal) will be at Grandpa Victor’s bedside begging him to pull through as always. Fortunately for her sake Victor does indeed wake up, but that is going to send Kristen into a panic because she thinks he will remember what happened and then it’ll be all over for her. No word on that yet, Victor could remember everything that happened to him and he could have blocked it out, we’ll just have to wait and see.

NBC ‘Days of Our Lives’ Spoilers for April 30: Rex and Sarah bump into each other in Paris

Meanwhile Sarah will get the surprise of her life in Paris and run into Rex Brady (Kyle Lowder), they’ll have a chat in a cafe that is civil enough but little does Rex know that Sarah actually can’t wait to get rid of him.once he is gone she’ll be breathing a sigh of relief about how he didn’t take that much notice of little Mickey Horton. Or at least that’s what she thinks. In a few days Rec will get the phone call about how Sarah has taken off with the missing child and then he will realize just what he was actually looking at. But Rex may have a buttload of trouble himself to climb out of next week!

NBC ‘Days of Our Lives’ Spoilers for April 30: Gabi passes out

Gabi DiMera (Camila Banus) will see who she thinks to be Stefan in the town square and pass out. It’s just Jake Lambert (Brandon Barash) but it’ll send her reeling all the same. When she comes to, Jake will be there and she will instantly start interrogating him. However, Jake doesn’t quite know how to handle that, he’ll insist that he’s not Stefan and flee. When he gets to the garage whe will tell Ben all about what happened and Ben won’t be surprised one bit about Gabi’s reaction. This will leave Jake rather unsettled though. Yike!

NBC ‘Days of Our Lives’ Spoilers for April 30: Kate floats the idea Stefan could still be alive

Gabi will then proceed to fill in bestie Kate Roberts (Lauren Koslow) about what happened. Kate, having been married to Stefano DiMera before, probably has some inside info on the Phoenix himself that will cause Gabi to believe that Stefan could be alive. But will this be real or will this just be another red herring? Stay tuned!!! 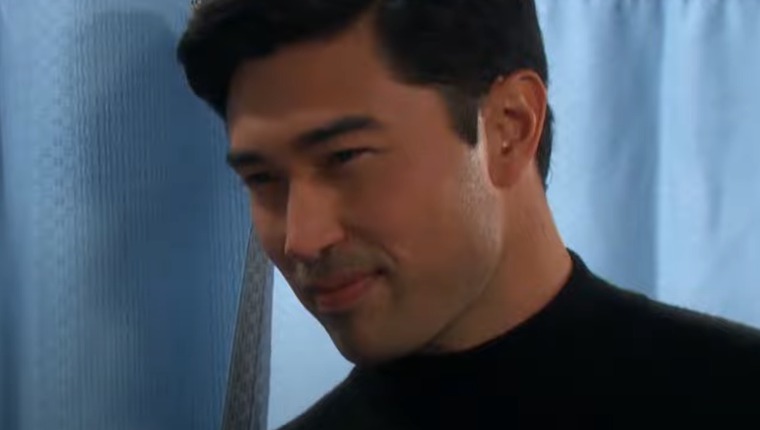