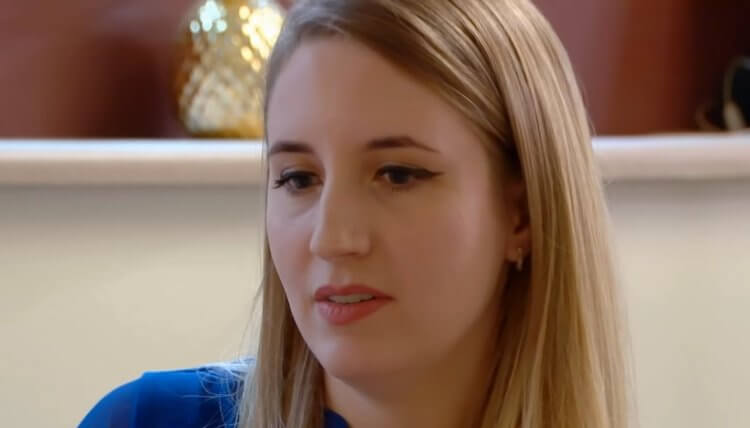 TLC ’90 Day Fiancé’ spoilers tell us that Emily McCue’s sister, Betsy thinks her sister’s husband, Sasha Larin’s real intentions will soon show. Fans of the show know that Betsy wasn’t okay with her sister and Sasha’s relationship. She was uncertain if Sasha wanted her sister for all the right reasons. Now that the couple is married, Betsy still feels Sasha will soon show his true self.

Previous ’90 Day Fiancé’ sneak peek showed that Emily McCue and her sister went out to shop for a wedding dress. Betsy was never sure of Sasha’s intentions for her sister because he has a history of marrying someone, getting the woman pregnant, and leaving her to move on with another woman. Betsy still wants to support her sister despite this, so she agrees to go wedding dress shopping with her. Betsy loved the dress her sister chose. She said her sister looked “like an angel” but she wants sure if Emily was getting married to the right person. She said she hopes she chose the right groom.

Before their wedding, Betsy spoke to Sasha. Betsy was hoping that her sister’s then-fiance could keep a promise to her. She asked him to promise to always love her sister. Sasha replied that he will do his best. Although she didn’t fully believe him, she attended the wedding.

Emily’s sister didn’t like the fact that Sasha has been married twice and he had children with both ex-wives. Betsy was afraid that he would do the same with her sister. ’90 Day Fiancé’ teaser shows that Betsy thinks Sasha will not stick with Emily and it will be a Tell-all topic.

Sneak peek shows that Betsy thinks her sister’s husband will change once he gets the license to work in America. Betsy says that “Sasha’s true behavior we’ll see that once he actually gets the green card.” Emily seems to be frustrated by her sister’s statement.

Emily McCue finds herself constantly defending Sasha Larin. The TLC star is either clapping back at trolls or proving to her family that her husband is a good person. ’90 Day Fiancé’ Spoilers reveal that when Betsy brings up the topic on the Tell-All, Emily loses it. Emily says she is fed up with people’s negative comments about her spouse. When Betsy says Sasha will soon show his true self, Emily responds “I’m so f****** sick of hearing this.” The TLC star is definitely not finding it easy.

CBS ‘The Bold and the Beautiful’ Spoilers: Brooke and Ridge Disagree On Why They’re Not Together