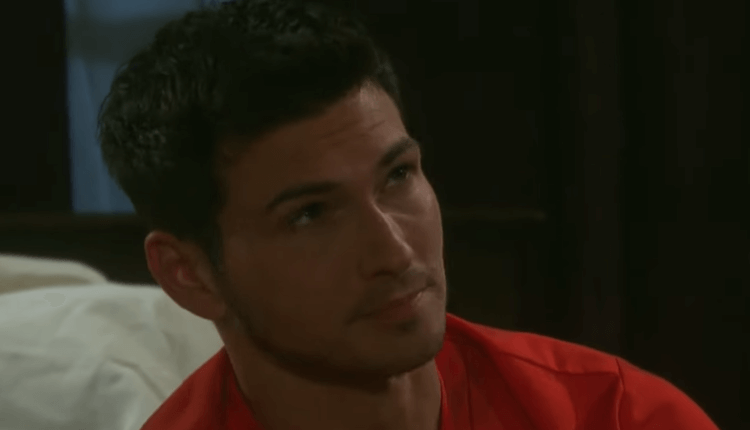 NBC ‘Days of Our Lives’ (DOOL) spoilers indicate that Eli Grant (Lamon Archey) will plan on having a special man-to-man talk with Abe Carver (James Reynolds) before he ties the knot with Gabi Hernandez (Camila Banus). Let’s face it, Abe wishes that things could have gone down a lot differently between Eli and daughter Lani Price (Sal Stowers) but he understands that there comes a time in every man’s life that he has to move on and this, for Eli, is one of those times. Abe will wish him well, and he’ll hope that one day Lani can find the happiness that he’s allegedly found with Gabi. But let’s unpack that, shall we? This ‘happiness’ was borne of an adverse situation that resulted because Gabi sought revenge on Lani for shooting her husband so she made her break up with him at the altar because she had a device hidden in Grandma Julie Williams (Susan Seaforth Hayes) pacemaker and now she has inserted herself into Eli’s life because… ? Is this really happiness?

NBC ‘Days of Our Lives’ Spoilers for February 14: Does Gabi still have the bargainin chip?

Gabi Hernandez still has a booby-trap set to Julie’s pacemaker so she hasn’t actually given up that tired old trick and honestly, I don’t think she would. I think Gabi would personally love to pull the trigger and kill Julie on the spot right now given the way she’s felt about her in the past but she’s hoping that Lani will stay in her place and that won’t have to happen because that’s the bargaining chip. If Gabi’s happiness goes down the drain, then Julie dies, plain and simple. She’s hoping things won’t come to that though because all the girl wants is a wedding.

She’ll get emotional once she puts on her wedding gown and then that’s when the truth will come out, she really, really want Stefan DiMera back as her husband but he’s gone so she’s willing to settle for Eli. Ouch! All Gabi wants is a good, uneventful wedding but it looks like that is not going to happen if Lani has anything to say about it because she’s going to crash the wedding and it also looks like she will learn one thing that Gabi doesn’t know yet – that Gabi’s leverage is gone.

NBC ‘Days of Our Lives’ Spoilers for February 14: Ben can live because Chad has a wife to attend to

Meanwhile Ben Weston (Robert Scott Wilson) and Ciara Brady (Victoria Konefal) will have some problems of their own, Chad DiMera (Billy Flynn) is going to show up and realize that those two are using the gate house as a hideout and that’ll never do, but fortunately Ciara is apparently blessed with the gift of gab and manages to talk CHad out of saying anything because if he says anything then Ben is sent back to prison to be executed and we can’t have that. Chad decides he can’t really worry about it right now and since it’ Valentine’s day he decides to go spend the day with wifey Abigail DiMera (Kate Mansi) instead.